A busy summer eventing and competing

Posted on 31st July 2021 and written by Maisie Randle

I can’t believe it is August already! Since the event season started back in April the weeks have just flown by and so much has happened, so be prepared, this is going to be a long one!! The first bit of excitement was the arrival of our foal Coco. Unfortunately I missed the birth as it happened very quickly in the middle of the night and my mum didn’t have time to come and wake me up before it was all over. It all went very smoothly though and we now have another beautiful filly foal by Timolin.

My first event of the season was Portman where I just took Smartie to do a BE90. It was quite an eventful start to the day as we had to leave at 4.30am in the morning and the lorry wouldn’t start!! We had to quickly unpack the lorry and load everything into the car and take Smartie in the trailer. It was also a really cold, frosty morning, the temperature was minus 4 degrees – not the kind of weather you expect to go Eventing in!!  Anyway, for his first event of the season Smartie did a reasonable dressage test and a double clear to finish in 14th place so I was very pleased with him.  I then took both ponies to Larkhill. It was another very early start and another very frosty morning, but at least this time the lorry started!! Bracken did one of her best ever tests with a score of 23.5 followed by a lovely double clear to win her section, and Smartie did a nice although slightly tense test followed by one pole down in the show-jumping and a clear cross country round to finish in 10th. So all together it was a very good day!

Broadway was our next outing and this time it poured with rain all day!! Bracken was doing the BE100 and she was an absolute star in very testing conditions. Her dressage test wasn’t the best, but her jumping rounds made up for it! She jumped one of the few clears in the show jumping round a big track that was very deep and muddy and was causing plenty of problems. We then did a steady clear XC round as the ground was extremely wet and slippery but I was so pleased with how she coped in the awful conditions. Smartie was in the BE90…..he did his worst tests ever!! He seemed to spend much of it on his front legs with his back legs in the air! I wasn’t very happy with him, but he was very pleased with his performance! I did forgive him though when he then went on to jump a double clear in difficult conditions. 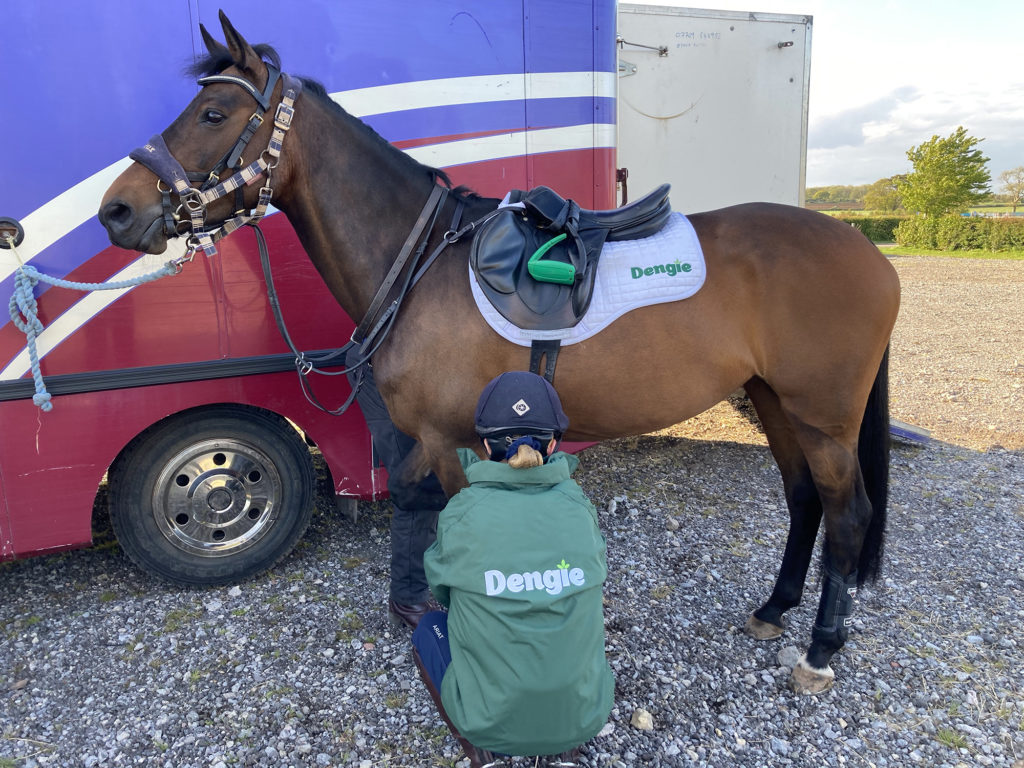 Our next outing was Tweseldown. Both Bracken and Smartie were entered, but Smartie pulled a shoe off earlier in the week and had a bruised sole so we decided to withdraw him, so Bracken went on her own.  It was another very wet day and the going on the XC was very soggy and deep in places. Bracken did a nice dressage test and jumped clear in the SJ, but I retired her on the cross-country course as she wasn’t enjoying the ground conditions. The next few weeks through June were busy with PC training for Area competitions and I had also got a new pony to ride called Luna so I was spending time getting to know her.  The PC Area Dressage competition was our next outing, I took Luna in the Novice Dressage team competition and Bracken to do the Intermediate as an individual. Both did really good tests and I was really happy to be placed on both of them, Bracken scored 69% and came 7th, Luna scored 72% and came second and our Novice team won the Novice Area Qualifier and qualified for the PC Championships!! Our team have been trying to qualify for 4 years so it was soo exciting to have finally done it!!

Chillington Hall Area Festival was my next Eventing competition. Bracken and Smartie had qualified for the BE90 Festival Championship so it was very exciting to be taking both of them.  The dressage test was in a long arena with full white boards and flowers……it definitely had a championship feel about it, although this wasn’t in my favour as both ponies were a bit tense and excitable resulting in not very good scores.  On to the show-jumping, and Smartie was still feeling the excitement of the occasion resulting in 2 poles down but Bracken was foot perfect and jumped a lovely clear round.  The cross-country course was championship length and was the longest course either of them would have ever jumped round so I was really pleased that they both jumped clear and inside the time, and Bracken finished in 9th place in a very competitive open section!  We decided to give Smartie a bit of a break after Chillington as he is still quite young so he went out in the field for 6 weeks and this gave me a chance to spend a bit more time getting to know Luna who I was hoping to take to the PC Area Eventing competition. 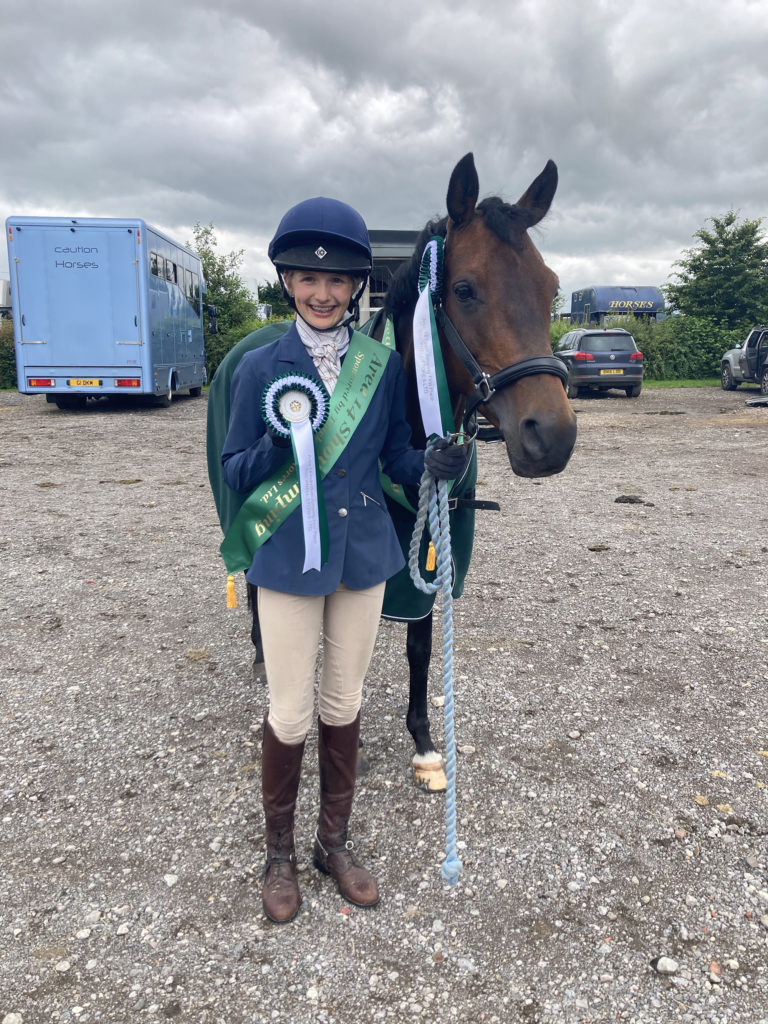 Brackens next event was at Offchurch Bury where she did a good dressage followed by clear rounds in the show-jumping and cross-country to finish in 5th place, our first top 10 placing at 100 level!! I was so pleased with her as she felt really with me in all 3 phases which we sometimes find hard to achieve on the same day!

The following weekend was the PC Area Show-Jumping with Luna competing in the Novice Team competition and Bracken as an individual in the Intermediate class.  Luna jumped 3 lovely clear rounds and to help our team to qualify for the championships in 2nd place! Bracken then jumped 3 amazing clear rounds in the Intermediate competition to take first place and qualify for the Championships!! I was so incredibly proud of her as she was the smallest in the competition and the courses were the biggest that we have ever jumped round, Dengie certainly gave her wings!! So now I had qualified for the PC Championships in both dressage and show-jumping, could I do a hat-trick and qualify for the Eventing as well?

I had decided to only take one pony to the Area Eventing competition and that was going to be Luna so that I could be in the Novice Team with my friends.  We started off with a good dressage mark of 28 which I was really pleased with and then a clear show-jumping round put us in a good position in our section and the team  was in a good position too as all 3 other team members had done good dressage tests and show-jumped clear.  The cross-country course was big and technical with quite a few tricky combinations, and it was a really hot day which just added to the challenge!  Luna set off full of enthusiasm and was jumping really well and confidently but 3 fences from home at an island fence in the middle of the water she had an unfortunate stop giving us 20 penalties, but second time of asking she jumped it and finished the course well.  Although it was disappointing I was actually really pleased with Luna as she is relatively inexperienced at cross-country and she had jumped really well through some tricky questions. Unfortunately all our team members had problems on the course which meant we were out of the placings and therefore we wouldn’t be going to the champs to do the Eventing but we had all had a good time and learnt a lot. It was also the start of the summer holidays which means more time for riding!!

My next pony outing was in the BE100 at Calmsden with Bracken. She warmed up for the dressage like she was Gio and I almost felt like I was Charlotte Dujardin, but then we went in to do our test and Bracken brought me right back down to earth by pretending she was a Llama!!  We scored 34.8 which actually was a lot better than I thought we would get. In the show-jumping it was my turn to let Bracken down, I pushed her too much going into the double and we had the first element down…..Brackens first show-jumping fault for over a year, I was gutted! Anyway, I set out on the cross-country determined that we weren’t going to have any mistakes and fortunately we went clear with just a few time penalties to leave us in 10th place.

So that brings me up to August with exciting things like the PC Championships to tell you about and some other big news…..but you will have to wait for my next blog to hear all about it! 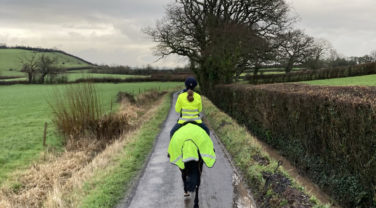 A typical day in Lockdown

As sadly there have been no competitions, I thought I would tell you how I have been spending lockdown #3, fitting in doing the ponies with online school lessons and what a typical day looks like for me.