A Great Start to the New Year

Posted on 9th January 2017 and written by Olivia Whitelaw

Happy new year to you all!

Leo and I have enjoyed a lovely Christmas, but we had only a limited break as we have been busy throughout December preparing for the FEI test review weekend for the GB Pony Squad riders.

The weekend involved on the Saturday all 26 riders riding the Pony FEI Team Test in a full competition which was judged by an International Judge to International standards, whilst the GB Pony Selectors sat and watched each rider pony combination. This individual competition is one of the named selection events for riders to be considered for the forthcoming International show in March, so everyone certainly could feel the pressure.

Whilst we rode as individuals we were all also placed in teams of 4, of which the teams highest three scores counted and went through into a team competition too. On the Sunday we had formal Trot up practice with the GB Pony Chef D’Equipe, a one to one meeting with the GB Pony Squad selectors and also a ridden training session.

I am glad to report all went well and Leo was a star. Whilst we made some errors his new trot is coming together so well, he’s getting stronger and stronger with it and overall we placed 10th individually on a final score of over 66% and we were also a counting score for our team – and our team well we only went and WON!!

I was so delighted that on only his third attempt at the FEI Pony Team Test, when in such a pressurised environment and against such strong competition and amazing international ponies he really tried and was rewarded by the judge with his marks.

Sadly the Trot up went a little less well… as at first Leo thought it would make much more sense to walk than to trot as he obviously thought he needed to save his energy, but I am pleased to report he did do as he was told on the second attempt!

The selectors seem to be pleased with our progress, however, we remain under pressure as this coming weekend is the next selection event, with the GB selectors attending to watch our performances at the Addington High Profile show. Leo has never been to compete at Addington before so let’s hope it’s a good experience for him and fingers crossed we get another solid score. 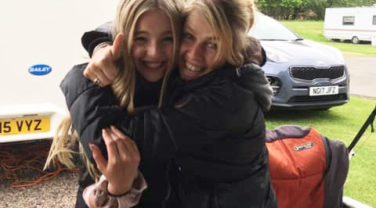 Celebrations all round for Team Esberger

A week of celebrations for Team Esberger as Larry gains his qualification for the regionals and Molly is selected to represent the North at the Inter-regional Championships.