A Weekend of Two Halves!

Posted on 9th February 2016 and written by Olivia Whitelaw

Well it’s been a busy couple of weeks. Potter, Leo and I have been training hard with both Hannah and Darryl and we decided to enter a two day show at Keysoe in Bedfordshire for Leo to have his first affiliated outing. All our local venues are indoors, so I was keen to see how Leo handled doing tests in an outdoor arena. Keysoe also has long verandas next to the arena with a cafe and shop, so it always has a really busy atmosphere for ponies to get used to.

We arrived on Friday. Leo settled into the stables well and came out fairly fresh but happy on the Saturday. We did our first Elementary test outdoors – he was a little tense but worked well and scored a very fair 65%. Next, we went to the music test. This was Leo’s first go at dressage to music, so I was not sure how he would handle it. I need not have worried – he was simply brilliant. There were lots of mistakes when he started trying to second guess what came next (we had three canter strike-offs when all I wanted was plain old working trot), but I was amazed and delighted that he came 2nd in a large class with a score of 72%.

Sadly, despite working in beautifully in the indoor arena, Leo was quite fresh and unsettled outdoors on the Sunday morning class and I made the decision to withdraw from the afternoon class. Instead, I just persevered in the outdoor warm-up until he settled and then took him back and untacked him. So as you can see, it was very much a weekend of two halves – Leo can obviously handle the staying away part easily, we now need to work on riding in outdoor arenas. When we got Leo we knew it would be a journey we were going on. We got glimpses of greatness this weekend, so overall we have lots to still be happy with.

The ponies are all really well, the new feed options seems to be working well and they all have an amazing shine in their coats from the Dengie Alfa-A Balancer so they all look super. 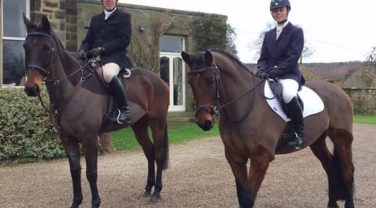 A Picture of Health

I'm glad to report that all the horses are still on good form and feeling fab on their Dengie diet of Healthy Tummy and balancer, the results can be seen in the photos Mark Harvey recently took, they look the picture of health.