Posted on 2nd April 2015 and written by Tanya Buckingham

Last week kicked off with a lesson with Paul Hayler on Sparkle…he was amazing! We worked on his single changes and trying to get him to sit more and come more uphill in front – even Paul was impressed with how much he had come on, a compliment indeed!! We managed to finish just in time for the heavens to open (this should have been a sign for the rest of the week!).

Wednesday Bob had a lesson with Gwyneth, working on his tempi changes to try and make him more reactive to my leg aids (he can ignore me – Typical man!!) We worked the tempi changes on a 20m circle so I had to have him really straight into my rein contact and moving off the leg, by the end of the session we cracked it! Hopefully he will be as good in a straight line!!!

Thursday I was back at Northallerton this time for a combined training with Molly and Sparkle. Molly was so much better in to the contact and in front of the leg in the test, she is just getting better and better! She jumped a course of 90/95 which is the biggest she has jumped as a full course. Molly started off jumping huge, but after a while she settled and had a much better rhythm into the bigger jumps. Sparkle ran through the test for Burgham and was good – a little tense with it being inside but contained his excitement! He jumped well again around the 120 track.

On Saturday we made the trip north to Burgham Horse Trials to compete in the intermediate with Sparkle. On the way it chucked it down and when we arrived we had to be towed on, always a good start! I did my test in the rain and mud – and he did a good test, sadly we hit the bog during the medium trot and he broke in to canter but other than that he was calm and obedient. The Xc course looked lovely – but having walked the SJ I felt the ground in the arena was too slippy and the jumps were being blown down as we walked it, so I took the decision to withdraw. With it being so early in the season and Sparkle not needing the run as a qualification I felt it wasn’t worth risking him. It was such a shame as I love the event, but we will be back there in the summer, hopefully without having to be towed on and off! 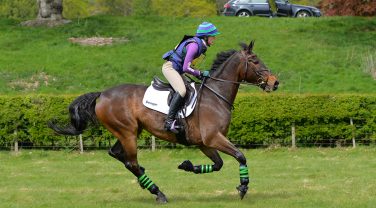 The Ups and Downs of Eventing!

I've had my ups and downs with Sparkle recently whist out competing. He wasn't feeling himself at Richmond Horse Trials, but after a session with the physio and a few days rest Sparkle was back on form.