Posted on 8th February 2016 and written by Alice Oppenheimer

After the new year celebrations were over and the realisation that we are in an Olympic year had sunk in, it was all systems go preparing the horses for the forthcoming season. We started with a Lottery funded UK sport World Class Podium Potential squad training session at Addington Manor. This session was entirely centered around the horses and it was a good opportunity for me to take Del (Headmore Delegate) and Bracks (Headmore Boadicia) to have a run through the tests!

On the first day I rode them both around the Grand Prix. Del was a little bit too fresh, so we had a couple of frustrating mistakes meaning we finished on just under 70%, but I was pleased he was so keen! I was thrilled with how Bracks had improved and she did the best I could expect from her to score over 67%, so I was very pleased. That afternoon I had the chance to have my riding analyzed by Russell from Centaur Biomechanics, which was very helpful and gave me some more things to improve on.

The following day I had the chance to practice the Grand Prix special with both of horses. Del felt amazing and produced a really confident test to score 74.5%. As you can imagine I was thrilled, now I just need to aim for that in actual competition and I’ll be away! It was the first time that Bracks had run through the test and overall I was very pleased with how she coped with it. There were, unsurprisingly, a few little wobbles to iron out, but I think she’s going to be very exiting this year!

The following weekend we made the trek back to Addington Manor for the High Profile Show. First to go was Bracks. She was fab and although we had a few mistakes, I was thrilled with her and for where she is at the moment she was simply incredible! She scored over 67% to finish 4th in a massive class of 25! As Del hadn’t competed since July I wanted to take him out and see where we were. I was over the moon with the ride he gave me and even more pleased with the score of nearly 72% to win by 2%. It was a very good start to the year!

We also took Billy (Sir Rusticolus) out for his first outing of the year. Now that I’m allowed to ride at novice and elementary again I have a lot more qualifying to get done, not that I’m complaining, but it meant we wanted to start early. When we got there the arenas were really hard and I was a bit nervous about riding him on them, but Mum told me to get on with it! He hadn’t competed for a long time and I was very pleased with how sensible he was. He won both elementaries with +70% scores, so a very good start to his qualifying campaign!

I had a slightly different trip to what I’m used to for one day as I headed up to BETA to do a talk for The Brooke about my trip to India with Charlotte. I’d never been to BETA before, and I was like a child in a sweet shop with all of the different companies displaying there! The talk that I did with Alex Stewart went well and created some interest in The Brooke, which was fantastic.

To finish off a reasonably busy January I headed back to Addington Manor for another squad training session. This time I took the opportunity to practice Del’s freestyle and it was lucky that I did. Where he’s changed so much my music didn’t fit, so it’s lucky I found that out with enough time to change it! I also took Robin (Headmore Dirubinio) for some training rides. I was very pleased with how much more confident he was than the December session, and I now feel that he is ready to go to a party, I can’t wait to take him out! Now I feel ready for the season ahead, it’s looking like it could be quite exciting! 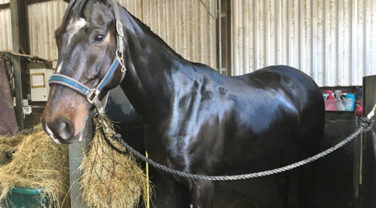 We are living in unprecedented times, but luckily our horses here at Chelwood Equestrian are none the wiser. We have around 50 horses onsite, and luckily most yard managers and staff life onsite, therefore we are able to continue to care for the horses to the highest standard.