Posted on 17th March 2015 and written by Brook Howells

It is a strange feeling, knowing that the season is about to start and knowing you’re not going to be part of it, despite having a healthy event horse and being injury free yourself. Everyone else is gearing up ready, social media is full of the news that it’s nearly here, and I am stuck on the sofa (occasionally literally) waiting for our own special delivery, who is also nearly here. Sadly babies don’t follow as clear a schedule as the BE fixtures list so waiting is all I can do.

Corey is in fine form, even if his exercise for the last four months has been limited to laps of his paddock, endlessly chasing Danny for cuddles. He has kept great condition over the winter on his diet of Alfa-A, Alfa-beet and haylage. He seems completely oblivious to my current condition even though the bump is now unmissable, and even more indifferent to me; unless I’m wielding polos he has no interest in me, since I’ve ‘abandoned’ him for so long. Little does he know that he has a date with the farrier in 3 weeks and that as soon as I’m up to walking out on old faithful Danny to keep her company, Mum will be starting his roadwork. He finished 2014 with a flourish and was awarded 3 trophies at the riding club AGM a few weeks ago, so we’re all hoping his extended holiday has done him nothing but good and he comes back into work easily (and not too full of the joys of spring!).

We have provisionally made a plan for the summer, though it is definitely one made in sand as none of us know how becoming a mother will affect my ability or desire to event. Having said that, I last sat on a horse 3 weeks ago and given that the only thing keeping me from riding Danny now is a fear that I won’t be able to get off without a hoist, I find it hard to believe that I’ll be anything other than desperate to get going again. Naive, I know! I will of course introduce you to the newest member of Team Supercobs as soon as the dust has settled, and until then I hope everyone enjoys the start of eventing 2015! 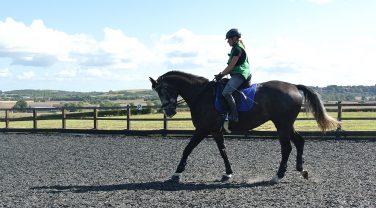 No Time for Holiday Blues

There was no time to suffer from the holiday blues on return from our lovely family holiday. It was straight back to work the following morning, and my feet did not literally touch the ground.