Back to the Grindstone

Posted on 5th February 2015 and written by Alice Oppenheimer

After welcoming in the new year, it was straight back to the grind as I had my first World Class squad training session to prepare for. I was really looking forward to it and we set off for Addington with Del (Headmore Delegate) and Bracks (Headmore Boadicia) hoping to learn loads!

We didn’t ride on the first day, it was solely about the riders, so we had a lot of different experts to see! By the time I’d spoken to the doctor, nutritionist, physio and the strength and conditioning coach I felt thoroughly dissected, but I learnt a lot and got some really good tips to go home with!

The following day we got to ride a test and have it judged by two top international judges. I rode Del first round the Grand Prix and he did a lovely clear round. I was thrilled when I watched the video with the judges, especially as one judge awarded him 70% and the other gave us 73%! I also tried the Grand Prix on Bracks and she tried her hardest, it was just a bit wobbly where she is new to the level but both judges commented that she showed a lot of potential. I also had a chat about my competition plan, which was really useful, and I now know which shows I’m aiming for!

On the final day we got to ride through a test again. Del felt really good so I went for it a bit more,but this also meant I had a few little wobbles so we came out on similar scores from the previous day. Bracks also really tried but she was tired so was even more wobbly than the previous day, but she just needs to get some experience now. I also had a session with the sports psychologist which was really interesting, she had worked me out in 5 minutes! Overall I really enjoyed it and it’s incredible what backup we have with all of the experts available, roll on the rest of this year!

We had a trip back to Addington the following week for the high profile show. It had been so windy at the World Class training that we had felt sea sick sleeping in the lorry, but for the high profile show the temperature had dropped and it was rather chilly!!! We started early on the first day with Socs (Tantoni Sir Soccrates) doing his first PSG. I wasn’t sure how he would be as he hadn’t been to a show since the Nationals and he had stepped up a level, but he was fab. I didn’t ride him on full power but he still scored nearly 72% to finish 2nd in a class of 40! Not bad for his first PSG! The following day he felt fab so I thought I’d take the hand brake off and go for it! He was awesome scoring nearly 74%, just a few marks behind Becky Moody, who was 2nd at PSG at the Nationals last year, so definitely not too shabby for his first show at that level!

That evening it was the Grand Prix. I started off on Bracks and she was a bit wobbly and green, but got round it to a fashion! She still needs a bit more strength but I had some lovely comments about her. It was then Del’s turn and he was feeling a bit cheeky and very pleased to be at a party! As he was a bit too fresh I couldn’t completely go for it but he still scored over 70% to win by over 4%! So all in all, it was a very good show!

Following these results, I have been selected to represent GB in Vidauban with Del in the big tour and Socs in the 7-9 year old small tour! I’m so excited and really looking forward to it!!

Finally, Del and I will be featuring in the next Dengie advert for British Dressage magazine, so keep a look out for that! 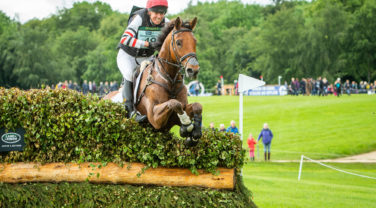 Another step closer to a equestrian's dream

After a successful run at Bramham Horse Trials, Lucy Jackson and Superstition are another step closer to any sportman's dream - the 2020 Olympic Games