Posted on 12th August 2016 and written by Olivia Whitelaw

We have just got back from the Bury Farm BD Regionals where we were in two huge silver classes both of which had 37 competitors!

We arrived on Monday without having been able to do an arena walk, so as we entered the ring Leo had something of a panic at the podium next to the ring having never seen one before. This resulted him being unsettled and spooking at the podium throughout our test. We also knew his way of going is really established at medium now instead of novice which would penalise us, so I was very pleased with him despite everything to place 13th out of 37, and to be awarded highest placed Under 25s rider.

As the Childeric UK sponsored elementary class was my sponsors test I wanted to try to do well. Leo tried his very best, but sadly I for some reason forgot my ‘Give and Retake’ so we promptly scored two zero’s for this movement and he was still a little unsettled to do his best work. Despite this he still scored just shy of 70% and we were placed 4th, again with the award for highest placed Under 25’s rider, one of the judge’s even had us in second place, so so pleased with Leo.

Thanks to Daisy Jane Powell dressage for her ongoing support and help warming me up on Monday, lovely to catch up with friends and to make some new friends too.

I think you will all agree Leo looks fantastic in these photos, special thanks to the Dengie nutrition team for all their help with his diet – many people have commented on his fabulous coat shine.

Now it’s time for him to have a well deserved rest before we begin preparing for Sheepgate Under 25 Championships. 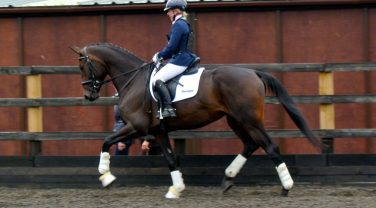 On Tuesday, a dream I’ve had for a long time came true – Tantalize went out to compete at her first ridden show. I have been looking forward to this ever since the idea of her first began five years ago.