Posted on 3rd November 2015 and written by Alice Oppenheimer

The arrival of September always signifies the end of the season for me as it culminates with our National Championships.

We left for the Nationals on the Wednesday having had a slight drama as Del (Headmore Delegate) had come out with a hoof abscess that morning so we unfortunately had to leave him at home and later withdraw him as we didn’t have quite enough time. It was a major disappointment but he is absolutely fine now and that is the main thing!

Nevertheless we cracked on with the other four and they all settled in well ready to start competing.

Socs (Tantoni Sir Soccrates) was the first to compete in the PSG. We have had an amazing year together and I was hoping for a good result. Socs was unbelievable and answered every question I asked of him to produce an outstanding test which was rewarded with a score of 75.08% which took us to the top of the leader board. It was an incredibly long wait to find out if we’ve done enough as we had an early draw but we managed to hang on for the win, which was just incredible!

Bracks (Headmore Boadicia) also produced her best Inter II test to date to finish a very respectable 6th in her first year at the level, so all in all it was a very good first day!

The following day was the Inter I with Socs. He was a little tired after the PSG but still finished 3rd with nearly 72% to continue our good run of form.

The weekend was slightly more manic as we had more tests to fit in! We started with Wilbur’s medium and, despite it being his first appearance at the Nationals, he produced a very nice test to finish less than 0.5% out the placings. Tank was rather more nervous but we managed to get round without a mistake so hopefully he will gain confidence from the experience. We finished the day off with Socs Inter I freestyle. Once again I was aiming for a top 3 finish and, as ever, Socs tried his heart out. We finished on nearly 77% finishing 3rd behind Carinsio and Woodlander Farouche, quite something!

The final day started early again with Wilbur’s advanced medium. Once again he tried really hard and, despite a few little mistakes, finished on a very respectable 68% so two very good results at his first Nationals. Tank was more settled but still quite on edge, finishing just behind Wilbur but still a good experience for him and something to build on.

We finished off the week with Bracks doing the Grand Prix freestyle explained demo with Isobel Wessels. She was absolutely amazing and loved it, producing a lovely freestyle test at the end. The crowd loved it, and so did she!

Overall we had an amazing Nationals and we certainly celebrated with some champagne when we got home! 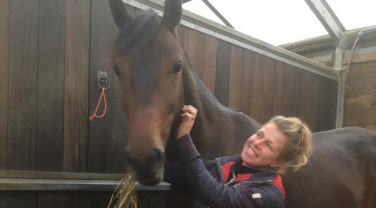 AJ is a Knock-out at Carl Hester's

I had a great training session at Carl Hester's this week! He loved my new boy AJ. Carl even said he would have bought him!