Posted on 28th February 2017 and written by Tanya Buckingham

So with the eventing season rapidly approaching the horses have been out and about competing and training. Chris Bartle has been putting them through their paces on the flat and Susie Gibson has been helping with the jumping! It’s always exciting this time of year when the horses are feeling well and the nights are getting lighter….spring is definitely just around the corner! Stan has qualified for the British Dressage combined training championships in May and Skip has been out and about winning at pure dressage!

I have also just bought a horse to replace Sparkle (who has downgraded and gone on loan to a junior). Not much of a shock it’s another bay but this time it’s a bay mare! I’m very excited about her, she’s 8-years-old and has done a couple of intermediates with her previous rider so I hope to be out having some fun this year!!

I hope everyone is excited for the coming season! I know my horses have wintered very well on their yummy Dengie feed. 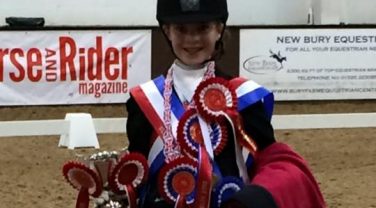 A Rosette Or Two…

Well, I am just back home from the Dressage Under-21’s UK Spring Championships – the first major competition of the year – and I am very proud of the boys as they did brilliantly and worked really hard.