Excited for the Season

Posted on 6th March 2015 and written by Tanya Buckingham

Well it’s nearly that time of the year again….the eventing season!! I start next week at Oasby with Sparkle having an easy first run around the Open Novice. He is feeling very well at the moment and it’s safe to say we are very excited about starting eventing again!

The past month has been busy with getting the horses in tip top form, lots of lessons, training and some BSJ and BD. Sparkle has been jumping the best he has ever done and even came home with prize money from BSJ. This was a total novelty as he would previously have been the one to have a pole down. I have however had a slight change in bit and have been playing a lot with jumping on circles, getting him more balanced and keeping a more up beat rhythm. Lets hope it works on grass! Sparkle has also had a few XC schooling sessions to get our eye in over angle and combination fences. We will head to Somerford after Oasby to school around the bigger jumps before our first Intermediate run.

Eva’s young horse Molly has had her first XC schooling outing and was a total star. We practiced water, ditches, banks etc. and she took to it really well! Hopefully all being well she will come out end of April/May and do some BE90 events.

I also took Molly to her first dressage competition and we got a very respectable 69% and 68% in the prelims. Sparkle went along too and was a total star and won the elementary with 71%.

Bob has been busy training at home and is out competing on the 18th March doing some more Advanced tests, all being well he will then go PSG in May!

Nan, Eva’s other horse, will also be out doing dressage on the 18th March and we will hopefully get her qualified for the Regionals.

Sadly I have had to take the hard decision to retire Buck. He had to have box rest during January and when he started walk work again he just wasn’t wanting to move forward. It’s such a hard decision but it is for his best interest – he will hopefully live a long and happy retired life! Horses can be heartbreaking sometimes!

On a positive note it was lovely to find myself and Sparkle featuring in the Dengie advert in Eventing magazine! My horses really do look amazing on the Dengie products – I can’t recommend them enough!

Good luck to everyone for the 2015 season! 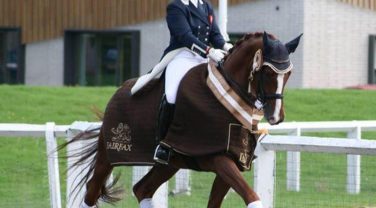 The arrival of September always signifies the end of the season for me as it culminates with our National Championships and this year I was hoping for a good result with Socs in the PSG.