Posted on 13th January 2016 and written by Alice Oppenheimer

December is always a busy and exciting month, and this time it was no exception!

It started with a National Lottery-funded UK Sport World Class Podium Potential training session. These are always a good chance to practice some tests and get a good check over by all of the practitioners. Del (Headmore Delegate) was a little bit too fresh (which I knew before going!) to produce his best work, but it was still a good opportunity for some test riding practice. I also got to take Robin (Headmore Dirubinio), so he had another outing for him to learn from and hopefully build his confidence for the future!

It then moved on to celebrations, starting with my birthday! I was thoroughly spoilt (including getting three birthday cakes!) and we finished the day with a lovely Teppenyaki meal, which is always a good laugh. So, I’m now another year older but what a spectacular year it’s been!

The following week was Olympia. I was disappointed to just miss out on getting to compete with Del, but I still had a wonderful day. The riders/ breeders lunch that was organised by Emma from Mount St John was as enjoyable as ever, and just seems to keep growing every year. It was also lovely to meet up with some of the people from The Brooke, who had either been in India on the trip or who had been behind the scenes organising. We finished with a lovely evening with friends watching the dressage! I also went up to watch the jumping World Cup qualifier on the Sunday with my Mum and sister. It was an outstanding class and we managed to find some time to squeeze in a little bit of shopping… A little bit?!?
It was then onto Christmas. I love the festive period and it is always synonymous with staying at home and doing the horses for me. Christmas wouldn’t be Christmas without some mucking out. We had a lovely day and I was once again very spoilt. I finished 2015 feeling very loved!

As we welcomed in 2016, it gave me a chance to reflect on what an outstanding year we have had. We won at both our Winter and National Championships and also internationally, but the best part for me was getting my senior team badge competing in Rotterdam and then get to compete on our home Nations Cup team at Hickstead. That badge was my one aim for 2015 and achieving it was very special. None of that would have been possible without the help of my fantastic sponsors, and I’d like to thank Dengie for their continued support! I wonder what 2016 will bring… 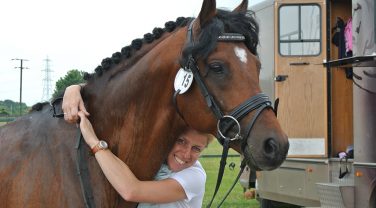 We had a long day yesterday, I was up early to make sure all of the other horses were exercised before taking Potter to Manor Grange to compete in the Mediums.