Posted on 18th May 2017 and written by Olivia Whitelaw

So I have really exciting news Albi and I had a great Keysoe Premier League. We went along determined to do our best, but still very much learning together so in all honesty to have the honour of winning the Pony FEI Class was so unexpected it was amazing!

Albi seriously tried his heart out for me, and we scored an average of 69.36% with one of the judges giving us over 71.8%.

On the Sunday we competed in the individual test, we sadly had a couple of communication errors between us which led to all three judges giving us two sets of scores of a 4. Given we have only been together for two weeks I was so proud of him as he’s only 7-years-old and yet he tried so hard so to misunderstand my ‘ask’ was completely understandable. However even with these two issues and these low scores would you believe we only ended up about 5 marks in total off the winning score. I couldn’t be prouder of him he was a superstar all weekend.

So then to this weekend, this time we were at Addington Premier League in again a very large PFEI Team Test with many proven international ponies in the class. Once again Albi tried really hard and we came 5th in the Team Test and 3rd in the PFEI Individual. I can’t tell you how proud of him I am, only four weeks in it feels like we have achieved so much already.

Leo’s hand walking has now come to an end, and I am pleased to say I am back on board. Leo has been very full of himself but so far he’s been absolutely brilliant and behaved himself impeccably. Not sure how he will handle only walking for the next month, but I plan on going on some hacks so hopefully he will enjoy it a little more.

Both boys had a fantastic diet review visit from Dengie Performance Horse nutritionist Claire Akers. Albi has now moved onto the Dengie Performance+ Balancer as he was falling short of his minimum required vitamins and minerals on his previous diet mix. Leo now seems very settled and will remain on a lower energy based diet for a while longer .

Next up for the boys, Albi and I are off to Summerford Premier League at the end of May and Leo has a review in Newmarket in June so fingers crossed he’s healing perfectly. 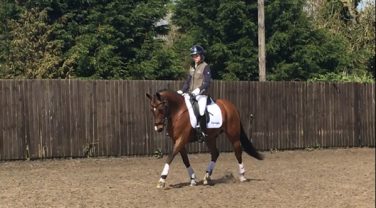 We've had a really positive couple of weeks. I'm really pleased to report that Leo has now started walking out, however in the meantime 8-year-old Albi has come to stay and train with me so that I can help him continue his Pony FEI education.