Getting into the Festive Spirit

Posted on 12th January 2015 and written by Alice Oppenheimer

As we welcomed in December we also started to get into the festive spirit! This didn’t mean it was all fun and games however, I still had some work to do!

I started with the induction for the World Class Programme. It was very different to what I am used to as it entailed sitting in a hotel for a couple of days, but it did mean that i was able to be a really good understanding of the programme; how it works and equally what is expected from us as members. It was lovely to catch up with the other dressage riders on the program and also have the chance to meet some riders from the other disciplines. We were also kitted out with all of our world class clothing and had our photos taken, which I wasn’t so thrilled about!

I also had to finish off my final winter qualifying tickets. We took Tank (Headmore Wimoweh) and Wilbur (Headmore Wrubinstar) to Patchetts to try and get their medium freestyle to music ticked off. They were both very good, Wilbur was fab and won and Tank finished 2nd after some tension, but that was still good enough for them both to qualify, meaning that I had managed to get all of the qualifying done on time, phew!

After all that was done, it was time for some fun! It started off with my birthday, which was a very relaxing day. My sister and I did a spot of shopping before going to the cinema to see Penguins of Madagascar (which was fab by the way!) and we had a lovely meal in the evening with my friends and family. I am, however, now halfway to 50!

I also had a couple of trips to Olympia. I went up on the Wednesday to watch Charlotte break her own world record in the freestyle, which was amazing! Emma from MSJ had organised a riders/ breeders lunch that day like we did last year, which was fab and it was lovely to catch up with some old friends and also meet some new people! I’m really looking forward to when I get the chance to ride in that amazing arena! I went back to Olympia on the Sunday with a group of friends to watch the jumping World Cup qualifier, which is always a fabulous class. We also had a pleasant surprise as it was the 128cm championship so we got too see Murka’s Headmore Little Lightning, who was bred by my Mum, compete. As ever I had a wonderful time and did plenty of shopping, and Olympia always signals the start of Christmas!

Christmas was a standard Oppenheimer Christmas! We were very busy doing the horses but we still had a really good laugh and made it a celebration. We certainly enjoyed ourselves! We also had an absolute blast at New Year and welcomed in 2015 in style! Surprisingly I didn’t feel too bad on New Year’s Day, but I think mucking out always helps you to wake up!

So we are now into 2015, and I can’t wait to see what this year has in store for us. Happy New Year and I hope it’s a good one for everyone! 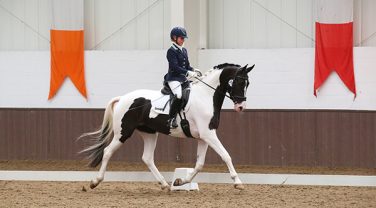 We had a great show at Addington! Isa was fabulous and so brave, she came 4th out 28 in the top young horses class! We are so proud of her!