Good Results For The Boys

Posted on 3rd March 2016 and written by Hannah Esberger

My boys Potter and Lenny went to Field House last week. Potter won one class and came second in the other and Lenny was second in both of his. Between you and me, the scoring was off as I thought Potter did his best ever tests and should have scored 70% or more, but he only came home with 66%. On Friday at Parklands, Potter won with 71%, although I thought he felt tired. I am really enjoying competing these two, they both try hard. Lenny can secretly be very anxious but still tries to go with me.

Our next trip was to Vale View in the freezing cold. Potter won his Elementary class with 68%, so he’s now well on his way to qualifying. He still needs to be more settled in the bridle and then we will be posting scores in the high 70’s. Lenny, bless him, gave me the best test yet in the first Advanced Medium test. He was so with me, really soft and uphill, and scored 72%. This was enough for him to win the class and then he went on to win his second Advanced Medium class and qualify for the summer. This gives me time now to work on training him for the higher level – how exciting!

I am LOVING my new boy Iggy! I was going to turn him away for a few months, but I don’t think I can bring myself to do it now!

There are now too many of us in the family to happily ‘camp’ in the lorry, so Mum and Dad have bought a camper van and we will be fighting to draw straws over who sleeps where. 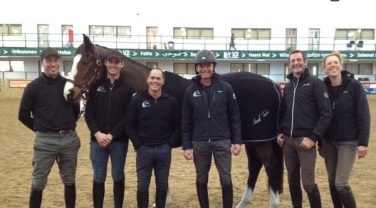 Ready and Raring To Go

I have just returned from fantastic day at the New Zealand Team Owners Day at Hartpury. I took six horses and had four clears in 1.15m and two four faulters in the 1.25m.