Posted on 13th March 2017 and written by Olivia Whitelaw

Sadly Leo and I never made it to the Regionals due to his injury, however we did manage to get to Myerscough Premier League last weekend where we were there competing in the Pony FEI Team test.

Leo has only been back in full work for a number of weeks so we knew the first Premier League of the season was probably arriving a little too early for our preparation level, but we went in determinded to do our best and the judges seemed to like it as we came away with a PB score of 68.97 from one of the judges!

Overall we took 5th place, which was amazing amongst such strong company, particularly given that each of the ponies placed first to fourth have al been to the Pony Europeans representing GB at least twice.

We now have a break for a few weeks so we are going to spend some more time training and then hopefully get out to gain some summer regional qualifying points before the rest of the Premier Leagues. 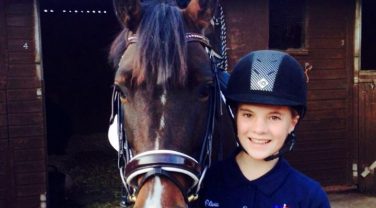 I'm sad to say it's been a very very tough few weeks...On the Friday of Addington High Profile Show, Leo was given a couple of hours in the field before we travelled. Sadly he spent those few hours playing a little too harshly.