Posted on 29th May 2015 and written by Brook Howells

Hello! We are back, and just as much on a mission as before! Greetings from motherhood, a surreal new world…

I like to think that people have enjoyed reading my blog over the last year because I am like the majority of eventers; working outside of the equine industry to fund a passion, trying to find time to train and have lessons as well as making sure I see my husband before dark, and striving for professional standards despite having only a field to school in. And so I like to think that people will continue to enjoy reading my blog, now I’ve added another job/challenge into the equation.

That ‘job’ is motherhood and that ‘challenge’ is looking after Florence, aka Flossie, born 10 weeks ago. It took me a while to figure everything out and understand the job. It’s not just working out how to keep a nappy on or make the bathwater the right temperature, but appreciating what being ‘Mum’ means. I am really enjoying motherhood but am still as passionate and driven to ride as ever. I’m finding the hardest thing is accepting that I now need help to ride; that I have to ask someone to look after Floss for an hour whilst I exercise Corey and although my parents are clearly very happy to look after their first grandchild, I’m still somewhat uneasy with that change to my independence. I am enjoying the opportunity to ride rather than work though!

Corey is making darn sure that every minute on him is worth it too. After nearly five months off, he has come back into work stronger and looking finer than ever. His diet of Dengie Alfa-A, Dengie Balancer and Dengie Alfa-Beet has helped him keep beautiful condition over the winter. Mum had him shod ready for the day I felt able to get on, which was three weeks after Floss was born and he did a few laps round the field to show he was ready to go… Initially we went out for a hack with Mum riding Corey and me riding Danny the old faithful, just in case I was not feeling 100%. Suffice to say, Corey behaved impeccably and looked so good that I was too jealous of Mum and the next day I was back on Cobs. I couldn’t wait any longer!!

We got his legs strengthened with three weeks of road work, then began schooling; he felt like he’d never been off. Our aim with the flatwork this year is to get to medium, which will be a first for me too. We’ve had a couple of little jump practices, including solid fences on a spin round the farm ride at Somerford and I am pleased to have nearly all my confidence still; and I think the little confidence we’re missing is more to do with starting over smaller fences that Corey doesn’t respect quite so much rather than feeling like I can’t be both a Mum and an eventer. I’m not rushing anything, and don’t plan to do a horse trials til July, but I am really looking forward to the summer with Team Supercobs. Although getting a point means we’re no longer eligible for Badminton grassroots, we have a new aim – the amateur novice championships at Gatcombe!

We’ve had our first couple of competitions too. We did dressage at the riding club, where Corey did a smashing elementary to get 66% and win the class. Then we did a local show jumping competition where we got a clear in both the 90cm and the 1m. We had a pole in the 1m jump off after we tried to turn a bit too quick, but I couldn’t complain when he had made such a good comeback.

I feel like Corey hasn’t lost anything for his prolonged holiday and I too am nearly back to form already – those skills I’ve not quite got are ones I didn’t quite have yet anyway! Floss has fit into Team Supercobs really well,behaved herself brilliantly already and if she is going to bring those sorts of results, she can join us as mascot any time! 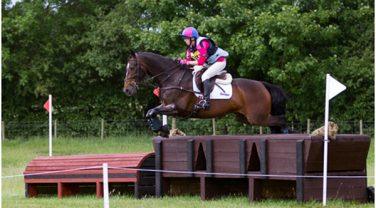 I felt really confident that we could show everyone just why I was going novice on Corey at Brand Hall. After last year, I was determined to set a new trend.