Here, There and Everywhere!

Posted on 20th July 2015 and written by Alice Oppenheimer

Well, it’s certainly been all go recently! We’ve been incredibly busy with competing as it’s that time of year – although I’m not complaining!

First up was a trip to Wellington for their premier league show. First to compete was Billy (Tantoni Sibellius) in the Five Year Old National class. I was thrilled with how he went and very pleased with the test, although unfortunately the judges didn’t agree – that’s young horse classes for you! Socs (Tantoni Sir Soccrates) then competed in what was a very strong Inter I class. He answered every question I gave him to be awarded over 72% for the lead, although it was a long wait to find out if we had done enough as Michael Eilberg wasn’t competing until much later in the day. I found out that we had won and gained our direct qualification to the Nationals just before I headed off to my insanity workout!

The following day we returned with Billy and Socs. This time it was Socs’ turn first and he produced a flawless PSG test to score nearly 74% and win the class by 5%. This completes his direct qualification for the Nationals in September. Billy was a bit tired after his efforts the previous day and didn’t produce his best work, but it was a good outing and experience for him nonetheless.

On the final day, we took Bracks (Headmore Boadicia) for the Grand Prix. She hadn’t competed for six months as we had been consolidating the Grand Prix work with her at home, so I was excited – but also a little apprehensive – to see how she would go. Overall, I was very pleased with her. She just got a little over the top at the end so we had some mistakes in both canter pirouettes, which is expensive as they are doubled, so she was awarded 62% – a very good starting point! Socs also contested the PSG freestyle gala evening. He was a superstar, as always, and finished 2nd behind a very experienced Grand Prix horse, so certainly not too shabby a show for us!

The following week, it was the turn of Tank (Headmore Wimoweh) and Wilbur (Headmore Wrubinstar) as we headed down to Half Moon Stud – which is where we got their dam, Rubinsteena – to complete their advanced medium qualification for the regionals! Both boys went well in what was only their second show at this level to finish 1st and 2nd with +70% scores. That completes their qualifications, so now we could start to relax!

The following week we set off for Rotterdam with Del (Headmore Delegate) for my first senior Nations Cup appearance. I was really excited and couldn’t wait to ride! We passed the trot up, despite Del trying to have a snack on the tree as we turned round, and were drawn second to go after the Dutch – which wasn’t ideal in Holland – and I was the first team member to ride. I was very pleased with how Del went – I had some annoying little mistakes but we just went into the arena and got on with it. We came out with 68% so certainly not too shabby for our First Nations Cup! Unfortunately, as a team we narrowly missed out on qualifying for the second stage and it was bizarre feeling to be so pleased and yet so disappointed at the same time!

We hit the ground running when we got home as we headed to Hickstead the following week for the Premier League! Bracks started off by contesting the Inter II. It was the first time we had done that test and, although we had some annoying mistakes, we still came out with over 65% to finish 8th. The following day we had another go at the Grand Prix and she was much more confident than at Wellington. Despite some wobbles and green moments, we still came out with another +65% score and are definitely heading in the right direction! Del also had a go at the Grand Prix and I had decided I would ask more from him. About 95% of the test was outstanding but he just boiled over at the end, which was a real shame as one of the judges came up to me afterwards and said that we were on track to win until then, but it was something we had to try!

Onwards and upwards now, I just have to get a very busy July out the way and then we can relax! 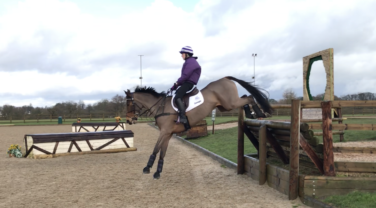 Beast from the East stops play for Tanya Buckingham

The horses are all fit and raring to go, we have been on XC schooling trips to Somerford Park and Richmond, been out to BS and BD competitions, hacking, training and started our trips to the gallops!