Posted on 12th December 2016 and written by Alicia Wilkinson

I’m back home from University for the Christmas break.

Googie is back up in full work and had her first jump this week since July! She was pretty happy and is feeling better than ever – we are really trying to nail this dressage before the start of the season.

Pooh did her last event at Aldon 2* and she did a great test with one big blip in the middle, followed by one down show jumping and unfortunately had a stop cross country because I approached a log with a big drop a little bit quickly without containing my canter enough, but she just popped it second time. Pooh has had a few weeks off and is back in full work now. Pooh has diastema (wonky and abnormal gaps between teeth) and has been coping amazingly on her Dengie diet of Alfalfa Pellets, Alfa-Beet and Performance+ Balancer, but recently she was dropping food. We have had her teeth done and they have been thoroughly cleaned out and the huge gaps packed back up by Ben at Paton and Lea – we will get them checked in another six months.

Tim is loving life in the mud!

Dougie my old pony is now a nanny for my new 3 year old, Incognito, aka Ziggy!!! I bought him at the Brightwells Elite Sale, which was held at Addington. It was a very organised sale and an amazing experience.

Ziggy is owned by a syndicate that I got together. It has been very exciting and he is a striking black 16.1hh gelding. Whilst I have been finishing at university my mum has started to back him. I first lay across him at the start of the week and today (middle of the week) I had my first trot on him. He is settling in well and seeHe has come from Germany after being bred in Holland, so has had a busy life travelling!

Diva and Pogo are as beautiful as ever coated in a layer of mud! On the way back from hacking the other horses Pogo comes galloping across his field to welcome us home. Dengie Performance Horse nutritionist Claire Akers came to weigh them both and Pogo is doing brilliantly and now weighs 257kg – almost half of his final weight!

They have all been weighed and we have exciting plans for all, especially Pooh who is going to have more slop to help with her teeth. 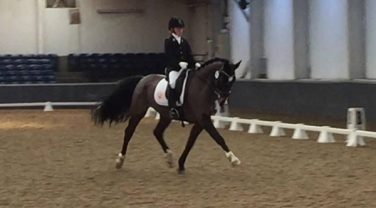 A Weekend of Two Halves!

Well it's been a busy couple of weeks. Potter, Leo and I have been training hard with both Hannah and Darryl and we decided to enter a two day show at Keysoe in Bedfordshire for Leo to have his first affiliated outing.