Last Jump of the Year

Posted on 5th November 2014 and written by Brook Howells

Busy busy busy! Despite the season being over and the nights drawing in – which should mean things are quietening down, I feel like I’ve been busier than ever! This has probably not been helped by spending the last week acting as entries secretary/organiser for the area winter dressage qualifier that our riding club was organising, or the fact that my diary at work looks slightly ludicrous. I’d like to say it’s going to get easier but the work diary at least is not looking any lighter in forthcoming weeks!

I can always still find time to compete though and last week our riding club had our annual combined training competition in memory of one of our founders, which I always look forward to. I’ve got my eye on the trophy for the open class and I came very close a few years ago when I tied for first. That year I got pipped to the post on collectives so I was as determined as ever this year, but the entries list looked like formidable competition. The open class consists of an elementary dressage test and 1.10m jumping. This time last year when I tried to do the same elementary (59), Corey got very worried by all the complicated movements; although he’s generally very chilled he doesn’t like to get things wrong and of everything he does, dressage is the discipline we have to work hardest at keeping him confident in. This year though, he breezed through it with such ‘aplomb’ that it was a joy to ride. It wasn’t quite a foot perfect test and there are bits to work on, but I loved it and loved my score of 71% for 3rd place even more. However, the lady in first after dressage (my good friend Alison who has also been trying to win the trophy for a few years) had an amazing lead of 13 penalties, so I decided to just enjoy the jumping rather than put any pressure on myself. The only problem with that philosophy is I ride much better when I’m under pressure because it all goes to pot slightly when I’m just having fun!

After our slightly wild jumping the last time we competed, we put a grackle on Corey for a little more brakes. I’m confident that with more schooling we can get him back to being calm in a plain cavesson, but we knew we didn’t have the opportunity to put that schooling in and this was going to be our last jump of the season. I also tried out a different warm up routine based on a recommendation from another blog – jumping a spread first – and he warmed up beautifully. He was listening to me, not too strong and feeling very ‘pingy’. Alison jumped clear (well done on securing that trophy Alison!) so it was all going to be jumping for fun from here on in and I must admit, this is where a few nerves crept in and I got worried. I started to ask myself what I was doing and whether jumping a round of 1.10m fences was really a good idea.

Because, and here is some big news people, I’m pregnant. And not just a little pregnant either – I’m five months down the line and although I’m feeling great, I am all too aware that there are risks involved with riding and babies. My decision to finish eventing a little earlier in the season than normal was largely influenced by this, but I had decided to try and keep jumping until this combined training competition. Except now the competition was won and I was still facing a lot of big jumps. I knew that everyone would support me if I decided not to jump, so I decided to go in the ring and see how he felt, absolutely no pressure. And apart from one moment when we were on such a duff stride (in my humble and probably inaccurate opinion) into a double that I decided to circle away for a better approach, he felt awesome. I came into the treble at the end, realised I’d hit the perfect stride and had an almighty grin on my face. What a way to have your last jump! I was so happy and thrilled!!

Hopefully that is still not the end of my riding for 2014 though. Corey would normally have a holiday about now, but as he will be having an extended holiday after Christmas (I’m due mid March), we’ve decided to keep him in work as long as we can until then. I’m going to keep all his four feet on the ground, so to speak, and focus on using his fitness to improve my dressage – last week we even had a go at learning half pass – alongside some gentle hacking. There is a dressage competition in 2 weeks that I’m pretty sure I’ll be able to get into my jodhpurs for, and then we’ll just have to wait and see! 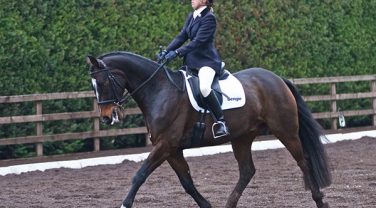 In my last blog I reflected on my last jump of the year and the big change that awaits us in 2015 with the arrival of our first child.