Lenny Competes at the Nationals

Posted on 22nd September 2015 and written by Hannah Esberger

We had a great time at the Nationals with Lenny. The weather was kind to us, although the previous day it had rained so heavily it resulted in the lorries having to be towed on and off the parking area. We could not have parked further away from the stables, making it an effort to barrow all of Lennys ‘needs’, but his stable couldn’t have been in a better position to refuel, right opposite the bacon butty and coffee van, perfect for early morning plaiting.

We were on at 9am, an hour into the Medium Open class. It was a very strong class,with a lot of very good tests being completed. I was thrilled with Lenny’s test, it was the best way of going we had shown in the ring, but even Lenny ‘felt’ the atmosphere and he fluffed our simple change from left to right which he never does. He also tried to cantor down the centre line at the finish, however we still achieved 67.3%, even with such huge mistakes!

Lenny hasn’t had much practise competing in venues with atmosphere, but he will be great next year at the premiers and hopefully the Winters. 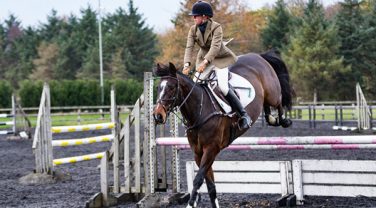 The title of this blog comes from a tweet I wrote last week, after my first event - Askham Bryan - got cancelled and I was left with a bit of a dilemma on my hands.