Posted on 15th April 2016 and written by Hannah Esberger

We have had a fantastic weekend at the Nationals. We set off on the Friday lunchtime, Lenny travelled well and I worked him for 45 minutes after he had settled in his stable. He felt really good and relaxed.

I was on at 11am on Saturday and I made a brave decision not to do the arena walk. I had been told it was a little crazy the day before and I thought this might wind big Lenny up more! He worked in very well but I think we were both a little on edge going down to the ten minute box, as I expected him not to like the clapping – but he was fine. Jo, his owner, smiled and told me to stop over-riding him in the ten minute box, but I was a little anxious about how he was going to react to the arena! As he went down the tunnel to the arena, he grew to 19hh…

I had no reason to worry as Lenny took it in his stride. He was a little bit tense, but held it together. The slight tension brought in some mistakes, which left us with a score of 67.94, but we were very pleased with him.

The next day was a very hot medium class. Lenny was a little behind my aids in the warm-up so I had to send him on and back a few times. He kept breaking into canter on the left 10m circle and blocking me in the bend, so I had to do a lot of flexing left and left travers and then he felt a lot more through. By the end of the warm-up he felt amazing, much better than the day before and more engaged and connected.

I was feeling confident on the walk down. He pulled out a great test, a few imperfections but he really tried and stayed with me. We were very pleased with 68.9% to finish 10th, as there was not much in the scores between third and tenth. 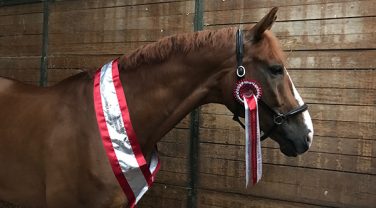 After what can only be described as a very slow start to the year after shattering my finger, it's become a very successful season for us.