Posted on 8th May 2017 and written by Olivia Whitelaw

Last weekend, Leo braved his first ever unaffiliated dressage competition. It was the first time he had seen a full set of white boards, so I was a little unsure what to expect. We had entered both the Novice and Elementary tests so that if we had a problem the first time he saw a formal arena then we would have the opportunity to go again.

Leo was brilliant and took it all in his stride. However, it was not my finest hour personally as I went wrong in one test – I’m not sure how I did that as Mum was reading the test to me, but I still did the wrong movement! Despite getting penalised for this and getting two penalties, Leo was amazing and we won both the Novice and the Elementary classes with scores of plus 67% and plus 68%.

This week, Claire, Dengie’s Performance Horse Nutritionist came to weigh the ponies and decide what would be the most appropriate feeds for them over winter. Tiff is obviously doing less work now that he is not competing and Leo, being only six, had started to lose weight now the grass has stopped growing. The good news is that both ponies weighed in where they should be. However, given that Leo is a baby and needs all the extra essential vitamins he can get, we are now going to swap him onto Dengie Alfa-A Molasses Free over winter and give this to him with Performance+ Balancer to make sure he has a balanced diet. Tiff is also going to have the Performance+ Balancer too. This balancer is ideal for baby ponies and those ponies that are a little bit sharper as it gives them all the vitamins and minerals that they need without fizzing them up. I will let you know how they get on with their new diets over coming weeks.

Next weekend, Cyden Oostings Amigo and I are going to Pony Progress Squad training. I will try and get you some more pictures and I am looking forward to catching up with everyone there. 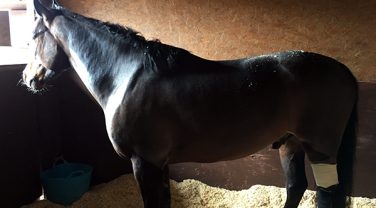 Trying Times for Olivia and Leo

Sorry to have not updated you for a while but it's been a pretty challenging few weeks as the Leo pony rollercoaster continues! A few days after Myerscough Leo's swelling on his hock returned. He appeared happy and sound but with a swelling we couldn't explain.