Mastering the Art of Doing Nothing

Posted on 30th May 2017 and written by Brook Howells

The slow start to the season continued with some quiet time working on our basics and keeping the pressure low. Then we went to America for two weeks to visit my best friend and her husband, who live in Savannah (what a beautiful place!). I booked the holiday to take advantage of Easter and the early May bank holiday being so close, but in so doing ruled out competing at three of my local events. When I booked it, I didn’t think this would bother me, but watching Facebook fill with pictures of all my friends competing I was green with envy! Thankfully I eventually got my season started at Richmond BE100 open and we’re already entered for our next two runs to make up for lost time.

In my flatwork lessons with Ann I’ve been trying to get his neck out and longer as he tends to tuck his nose in. My job is to ride all from my seat and use my hands less so that he draws forward to the contact. I can feel it’s working (not least in how it is testing my core muscles) and Corey is really starting to understand what I’m asking of him. I rode my test like this at Richmond and was pleased that he kept with me on the game plan near enough throughout. He got a bit excited to be at a party and so was not always listening quite as much as I’d like but as the first test we’d done ‘by seat’ it was a good effort and put us in 5th.

We’ve been working on our show jumping with Richard Davenport thanks to some regular clinics organised by the riding club. They are so local I could hack to them (and might have to soon since the Landrover is poorly again!). I’m developing a new strength in ‘doing nothing’; learning to let the fence come to me rather than trying to meet it. I even managed to win prize money at British Showjumping for a double clear! There is a lot still to work on, not least in establishing a steady rhythm, because Corey was excited in this phase too at Richmond. I think I managed half the track without interfering but sadly had one down when I couldn’t stay quiet into the double.

Cross country preparation has gone well​ too. Having missed Kelsall due to my ill-timed holiday I went for a play over the course there with Neil Fox giving me advice (hands down!!) and came away reminded of how great Corey makes me feel. As much as I expected him to eat up the 100 track at Richmond, I was nervous that he’d have lost some confidence after last year and his long winter break. I needn’t have worried; he flew round and was loving it, as was I. We even jumped the corner without hesitation – although looking at Corey’s face on the official pictures of the corner I don’t think he approved of how I squealed in delight! I deliberately didn’t wear a watch in order to focus on the fences for this first run, so I picked up penalties for being a bit too fast. Those and the pole down show jumping dropped me a place to 6th; a very pleasing result nonetheless, and it felt fab to be at a prize giving again after last year’s frustrations.

I have enlisted the help of sports psychologist Jo Davies this year too; even though I managed to fight off a few of my demons last year it was obvious in my schooling sessions this spring that there were a few still hanging about. I had a lot of help from a sports psychologist after I broke my back in 2004, and briefly worked with one last summer too. I have deliberately sought someone who knows eventing, so they’d understand where my safety fears come from and in only a couple of sessions Jo has helped a lot. We are developing strategies to ride positively and to keep me focused on a few simple jobs so that I stay relatively quiet.

Next up for us are Somerford BE100 Plus and then Brand Hall novice – the aim for both is to ride forwards. I visited Chatsworth this year as a spectator and remembered how much I want to ride that track… it would have been too big an ask this year but I’m aiming for it in 2018! 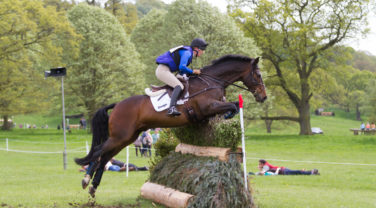 Well, two of my three countdowns from early March went relatively according to plan, but the third had a few false starts before we finally kicked off the 2018 season. However, it was a start to the season worth waiting for!