Posted on 20th August 2015 and written by Brook Howells

The last few weeks have been quite frustrating as we’ve had a few minor setbacks that have meant our fitness and training work have gone quite off plan, but hopefully we’re back on track now.

It started when Corey came in from the field with a very small cut to his hock one morning. At first it appeared to be nothing more than a small graze, but after a couple of days there was a little heat and swelling so we decided not to risk angering it and abandoned plans to take him to the gallops the next day. As soon as his hock was back to normal I went out to school him and was slightly concerned that Corey felt very reluctant and resistant. I put it down to being in our smaller field, which is not as nice a surface as our usual patch. (The field I normally school in is now home to four cows who are doing a great job getting the grass down; I was going to brave it in there but Corey took exception to them being right by the gate!) I went for a hack instead, except he was feeling very reluctant then too – even when we turned for home he continued to just steadily plod rather than march onwards like he usually does. He was sound and otherwise well but definitely wasn’t himself…

The next day I had a flatwork lesson booked so we went to get my teacher’s opinion on him. It was clear that something wasn’t quite right with Corey; he was sound and doing all his lateral work, including starting to develop his half pass without so much as a flick of the tail. This is quite unlike Corey. He has a great attitude to work, but at the same time he is not afraid to tell you when he’s finding something difficult and on this occasion he was just too polite. Mum and I decided that if he was still feeling low the next day we would call the vet out to check his bloods.

Well you can probably guess what happened next. Typically, the next morning when we brought him in, he was absolutely buzzing. Whatever was wrong with him had gone overnight and as I was about to leave for a long weekend away (to be Chef d’Equipe for our riding club’s team at the BRC Horse Trials Championships), I decided I would have a gallop. Except he had cut his hock again! Horses ey!?

The championships was great fun, though I was very glad to be just support and not actually riding this year. Camping with a five month old was a really good adventure that my husband and I both enjoyed, but trying to do that and complete a three day event – or even just trying to fit horse gear in a car as well as all the camping equipment – would have been too much! Walking the course made me eager to get on with Corey’s preparation for my next event and I was thankful that after having a weekend off, Corey’s hock was healed and he was still feeling full of himself. We proceeded full steam ahead to get him fitter and ready for his first novice at the end of August. He’s still not quite as fit and lean as we’d like him, but is doing 11 minutes of cantering comfortably in his interval training so I’m happy with that.

We’ve had good show jumping preparation – at the riding club areas where we had just one pole down over two rounds and at doing a Newcomers at British Showjumping. The latter was a great learning experience. I’m almost inclined to hide the video of it as it was very ragged compared to the stylish rounds of all the other competitors, but actually it is a really useful tool to see where I went wrong. It felt like a very fluent round with just unlucky poles, but when I watched the video back I could see those I had down were the result of me getting my turn wrong or holding too much in front of the fence. I guess it is good that I can see something to fix though and I felt confident jumping that height as a first round, so that is encouraging.

So now all my worries revolve around whether or not I can ride round a novice track again (I’ve got to have something to worry about!). Mum quite rightly points out though – I’ve always been rusty after even a short break and I’ve always been nervous about cross country, so I shouldn’t worry too much that I feel the same now. We have Somerford BE100 at the weekend to remind us how easy he finds it all, and then we’re entered for Llanymynech the following weekend, so I’ve not got long to get nervous. Oh and we’ve discovered that neither Corey nor the cows much mind co-existing and so we’re back to schooling and galloping in the big field. The cows make for interesting dressage judges actually, except they usually get bored and lie down! 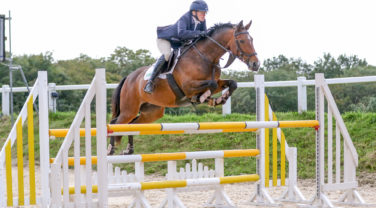 This isn't the blog I expected to write, but I am sure very few of us expected 2020 to turn out as it has! I had a fantastic training day with Dengie in January at Vale View and felt really excited for the season ahead with both girls in their prime and ready for an exciting progressive season.