Posted on 3rd August 2017 and written by Olivia Whitelaw

Albi and I had a lovely trip to CDIP in Diepenbeek in Belgium, we learnt so much it was a great trip. Having worried how Albi would handle the travelling I contacted my friends the superstar Paralympian Sophie Wells and junior rider Maddy Whelan for some tips and advice. Albi loved their tip of having apple bobbing sessions as we travelled which meant he drank well. This was such a relief as at times we found ourselves travelling in temperatures over 30 degrees!

Dengie Performance Horse nutritionist, Claire Akers helped work through our feeding plan prior to the trip and the only thing we really changed was testing Albi’s appetite for haylage instead of hay, so that we could use this to occupy his ferry trips and when on site in Diepenbeek.

Our trainer Andrew Fletcher adviced us before we left that with International travel you never really know what you have until you do your first trip, some come out tired post travel, some come out more than a little fired up. Suffice to say Albi was the latter, he felt so well he even tried to gallop off mid trot up twice. Luckily for us the ground jury thought that it was the passing train that had spooked him so they passed us anyway!

Sadly in the Pony Team Test it was not our day, Albi was bitten by a horse fly in his first pirouette and then again in his medium canter. At this point he decided he really didn’t want to play, so I was seriously riding for every mark to try and do the best we could. Albi wasn’t a happy boy throughout and I don’t really blame him as the horse flys on site were horrendous. On a positive we gained some really great scores for some of the movements and we managed to come away with a plus 65% result.

In the Pony Individual Test things went badly wrong in the rein back, but again some other good scores in some movements .

So overall score wise it wasn’t our greatest results but we learnt so much and I was really proud of how maturely Albi handled the whole journey and experience.

We were also delighted to hear that the GB Pony Selectors had picked us to compete at the CDIP at Hickstead, sadly however this was not meant to be as a few days before Albi became very uncomfortable in the saddle area leading us to withdraw from the show as his welfare is always a priority.

Earlier in the month we also held a clinic with the Pony FEI Gold Medallist Rebecca Bell. The Dengie team kindly came along to support the event and so both Leo and Albi had the opportunity of being weighed and checked over by Claire. Leo is now starting to come back into training so we have made the decision to increase the amount of Alfa-A Molasses Free and change back onto Performance+ Balancer to ensure he is receiving a balanced diet. As always feeding Leo is an ever ongoing challenge as he quickly puts weight on in the summer but does not always hold it well in the winter, plus now he’s back living out on grass rather than in the stable that adds another challenge. However Claire was happy with him and when it comes to food Leo is always happy! 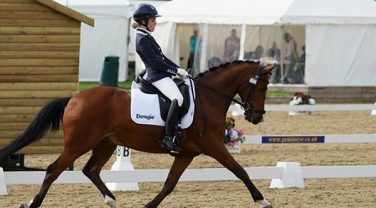 So my 14th birthday was made extra special as on the day I heard that the GB Pony Squad selectors had selected Albi and I to compete at the CDI Deipenbeek in Belgium in early July!