Posted on 21st February 2017 and written by Brook Howells

How is it already February?! I still have seven thank you letters to write, yet I’m looking at what events are open for entries. We had a wonderful family Christmas. Floss just about understood unwrapping presents, but not why after two weeks of being told not to touch the boxes under the random indoor tree, she was suddenly permitted, nay encouraged to pick them up! Still, festivities over; it was time to start preparing for the 2017 season.

After two months off, Corey came back into work with his usual preparatory roadwork, kept company by Danny as he can’t always be trusted to stay calm on the roads. Danny is a saint and will always keep going regardless, but does quite enjoy just chilling in the field now, so I think it was a close call between him and I on who was more excited that after only a couple of delays due to ice, we were soon ready to start schooling and jumping. Except, the field has been either too wet or too frozen…. Don’t you just love winter!

We have managed a few trot schooling sessions in the field and also hired the local indoor one night to get some canter schooling in. He is feeling good – he has perhaps forgotten some of his basics, like how to bend in the middle/anywhere in his body, but his stamina is already quite high and he still has the Corey attitude I love. I have kept working on my fitness with a personal trainer (Phoebe Schecter – she’s a hard taskmaster but great fun to train with) and I’m really noticing a difference, not only to my core strength but also to my awareness of my body and aids. When schooling, I am trying hard to halt every so often and consider what I’m actually asking Corey to do, not what I think I’m asking, and that is easing frustrations of miscommunication for both of us.

I had been planning to take a slightly steadier approach to the season than normal, but the plan may already be going awry. I was still on maternity leave this time last year, so this is the first spring that I’m trying to work and mother and ride. However, having had a little pop in the field over a 2 foot fence, I might have already changed my mind! Corey is so much fun to jump that I have been eyeing up potential first runs. Mum asked what had got into me, why the sudden change of heart… I answered that the “let’s do it” approach was the normal me, and the previous “take it easy” one was the anomaly – I must have had too much mulled wine!

We still have a lot of fitness and strengthening work to do with Corey before he’ll be ready to event, but we have been to a dressage competition with riding club. I made three mistakes. Firstly, I assumed that he would behave like he behaved the last time out. In November. After months of work and parties. Secondly, I assumed that because when I pushed for more at home he responded with engagement and a light contact, he would do the same in competition, not just think I was asking for gallop. And thirdly, I assumed that at the mature age of 11 he would not bat an eyelid at going into an entirely new arena…. Suffice to say the initial warm up and novice test (in said new arena) were a bit wild; Al helpfully took a picture to show me the best of Corey’s giraffe impressions, and although Corey didn’t do anything too naughty, I did wonder if it was a mistake to leave my neckstrap off.

He stood and chilled in the trailer for an hour with a nibble of haylage and came out renewed (in both body and spirit, eek) for his second test – the FEI one star class. Thankfully the usual try hard attitude was back and he let me get a bit more out of him. The canter was tenser than I’d like and there is so much more to do, but overall I was pleased and motivated by his efforts. The icing on the cake was getting the results. I was nearly last in the novice, understandably, but I was thrilled to learn the one star not only felt good to me, but merited first place!

I’m even more motivated now to get my jumping back in gear and see if we can tackle the 2017 events with the same determination (and hopefully better steering) as last year. Jumping lesson on Thursday and first show jumping competition is in just under two weeks! 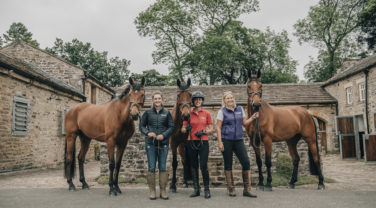 Things are hotting up by Tanya Buckingham-Lloyd

Over the last few months there has been lots of eventing, a yard move and scorching weather! The horses have so far (touch wood) all been on very good form this season!