Posted on 26th April 2016 and written by Brook Howells

My last blog was all about making the decision to withdraw from Lincoln and focus on a confidence giving run at Stafford instead, and that decision was rewarded with a great day’s eventing. The ground for the dressage was not ideal but I managed to get Corey going nicely in the warm up. Unfortunately, for reasons beyond me he decided to set off at a gallop as we went to go round the arena and the entire test felt like I was just trying to prevent an explosion. Obviously the atmosphere of the first proper party of 2016 had got to him! We used a bit of ringcraft to stay out of the mud and did a reasonable test but it was a shame I couldn’t really push him to give any more.

The showjumping was a great track and looked to be a full up 100+ course, which was perfect for setting us up for novice. He warmed up really well and was jumping out of a beautiful rhythm so I had lots of confidence. He started with the same beautiful rhythm, cantered really nicely up to the first fence and promptly slid right into it! We’re still not entirely sure what caused him to stop, whether he didn’t see it properly or had misunderstood some other way but I’ve decided not to worry about it. He’s not done it before so unless he does it again I’m putting it down to a blip. He jumped an otherwise foot perfect clear round and it is very tempting to edit the stop out of the video!

We took the cross country steady and took advantage of the new rule on stopwatches to practice judging our speed. Although I can, and have in the past, worn a watch at novice, I won’t be doing for at least my first novice this year and maybe more as I want to concentrate on the jumps first and foremost and not worry about my time. It is really useful to be able to practice judging and adjusting my speed though, so I used the opportunity of a relatively easy run at Stafford to do just that and I’m glad I did as I was the window for error is now much smaller. We had a strong clear round; Corey took on all the technical fences without hesitation and felt fabulous. A really great day that achieved it’s purpose of setting us up for the season ahead.

I wasn’t entered for anywhere after Stafford and looked at various options but decided in the end that Kelsall Novice was the best next step. I’ve schooled over the novice track there twice and although I had a problem with one corner last year, he’s otherwise stormed round, plus the ground is always great and Corey has run well over the other courses there. With five weeks to prepare I set about making sure I felt as ready as possible. We have been out twice to jump Newcomers at British Showjumping (and learning the hard way that when there are a lot of entries you should declare before getting ready, or else you only end up getting off again and waiting for another hour). Both times we had a couple of fences down but we had good rhythm and balance and the fences are not looking so big any more so I’m hoping the show jumping at Kelsall will look equally reasonable.

We’ve been keeping Corey’s fitness work up and trying to keep his weight down too. In the past he has come out of winters looking poor and having struggled to keep his weight on, so it is a bit of a learning curve for us that he is now struggling the other way! It’s noticeable that this winter his shape has changed generally too; the bigger neck typical of connemaras is more obvious, and he has filled out across his shoulders. Unfortunately for my bank account, this has required a change of dressage saddle and I’m temporarily having to do flatwork in my jump saddle, so I’m very excited about my new one arriving in May.

The spring weather has brought welcome progress to our ‘facilities’ as we’ve had chance to erect the training mirror we bought last year. When Corey isn’t whinnying at this new horse or wondering where it disappeared to, it is really useful. We’ve also put out our new jumps out and built some big corners to school over. Then our final bit of preparation was to go to Somerford Park on Monday this week for some technical fine-tuning. Sadly our chief photographer was at work otherwise he could have captured a great moment – me hanging off the side of Corey after we’d misread an owl hole fence. I thought for a moment I’d get back in the plate but after realising I was doomed, I’m proud to say I even managed to unclip my air jacket before landing on my feet. I’m even more pleased to say that I continued unabated and jumped quite a few skinnies in combinations, corners and jumps into water. It’s good to fall off once in a while to remember it’s not necessarily awful and even better to have your confidence challenged and proved strong.

Corey was a star at Kelsall and was storming round the XC after a good dressage for 27 and a confident showjumping round with just 1 down. Sadly I rode him too close to the flag at the corner and we couldn’t make it; think I need psychological help to get over these corners both metaphysically and literally! We have Bradwall next weekend so need to sort it quick!

We had a lovely bonus too as we bumped into fellow Dengie ambassador, Tanya Buckingham on our course walk – she teaches one of my best friends and her Dengie jacket gave her away! 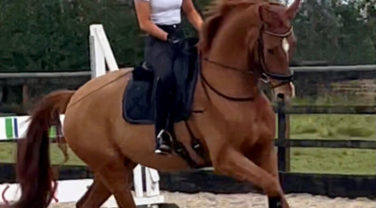 Recently we have been taking Lordy out to lots of new places and venues to build up his experience of going away whilst still applying the same training methods and routines for him to progress in his development.