Posted on 16th December 2014 and written by Brook Howells

In my last blog I reflected on my last jump of the year and the big change that awaits us in 2015 with the arrival of our first child. So I thought now a good time to reflect on the whole of 2014, my last dressage competition, and indeed quite possibly my last ride. Corey has had his shoes off and is on holiday for the next couple of months, chilling out. However, his stablemate Danny still has shoes on and at 21 years young is the equivalent of a walking armchair he is so calm, so I may just have the odd pootle on him if the absence of riding all gets too much!

Just before Corey went on his holidays we managed to squeeze in one last dressage competition. I mean squeeze too – the only way I could do my jacket up around my bump was with a little addition of plaiting band button extenders! A couple of weeks previously we had competed at riding club and got two great scores in the novice and elementary, even winning the latter. This gave me the impetus to keep going for the short while longer to try and compete in the last riding club dressage of 2014.

We were in the novice and elementary again and were well geared up after some fabulous lessons. By chance, I heard someone calling for an earlier rider in the novice and realised I’d mis-learnt the end of the test… oops! One more-accurate-than-it-could-have-been test later, I felt very pleased with Corey’s efforts. He makes it all feel easy! We had a short break before the elementary and then unfortunately got caught in a horrible squall – so bad that Corey refused to even walk round in the warm up. Thankfully it cleared in time for me to get him properly warmed up again and he tried even harder in that second test; doing his best rein back and simple changes to date. I was thrilled to find out we’d come second in both. There are still lots of improvements to make but I feel like we’ve ended the year on a high and really made the most of these last few weeks to push his dressage to a new level. Corey is working really well on the flat at the moment and we’ve had several comments that when horses aren’t jumping it really changes their dressage. I’m really pleased that he is moving so well, but I can’t see me staying all four feet on the ground long term… especially when I think what a great year I’ve had eventing!

I think back to 2013 when we seemed to be getting amazing scores every time out and compare it to this year, which has been lots of ribbons still but also lots of achievements of a different sort; that haven’t always looked good on the scoreboard. We’ve completed Badminton, qualified for and competed at the national riding club open horse trials championships – completing our first three day event together in the process – completed our first novice, qualified for the riding club dressage championships and come away with a top 5 placing, and got our first ever BE point. Wow!!

2014 has been a marvellous year thanks to Supercobs Corey, my amazing support team of Mum, Dad, husband, teacher Ann Harrison, physio Anne Sweeney, many riding club friends and of course the fantastic Dengie team. Thank you all. I hope you are all looking forward to seeing what 2015 looks like for Corey and I as a new mother. As I may not be blogging for a while until Corey is back in work, don’t forget you can keep in touch via twitter (@Eventer_Brook). 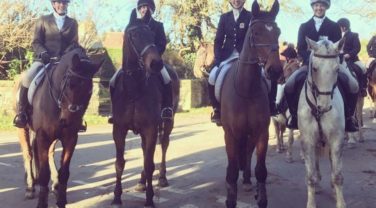 Getting ahead of the game by Tanya Buckingham

We had a trip to South Africa over Christmas so it was a case of sunbathing and searching for different animals on safari...a very different way to spend Christmas but it was fab!