Posted on 4th May 2016 and written by Alice Oppenheimer

With the summer season really being in full flow we have been very busy. We started with another trip to Cholderton with Finn (Headmore Diffinity) and Davina (Headmore Davina). Davina started off with her first novice. She was much more confident than at her first show and she won the novice with nearly 73% before going on to win the elementary with 74% – completing her elementary qualification for the regionals and gaining her first 9’s along the way! Finn was also super – scoring just under 70% in his first test and over 71% in his second to add more qualifying points for his elementary regionals. We are getting there with all these qualifications.

The following week we headed off to the Winter Championships with Tank (Headmore Wimoweh). He had a busy time as he had qualified for four tests and we started off in the Medium Freestyle to Music. We were drawn first to go so just went in there hoping to set the standard! I was thrilled with how he coped in the atmosphere and we came out with 72.2% which was good enough to finish 5th. In the afternoon we contested the Advanced Medium Open. We had a safe clear round which was good enough for just under 70% to finish 9th. All in all a good first day!

The following day started with the Advanced Medium Freestyle. Tank felt amazing until he got spooked and bolted in an extended canter. He did settle back down but unfortunately it kept our score down. This also meant that he was a little bit nervous for his last test in the Medium Open so we had too much tension. However, overall I was very pleased with him and it would have taught him a lot for the future!

We then had a week at home to regroup before heading off to Hagen for Horses & Dreams. I was very excited to be competing at this show as I’d been told it’s one of the best shows there is, so I couldn’t wait to get there. We arrived safely after a rather awkward journey but both Del (Headmore Delegate) and Bracks (Headmore Boadicia) travelled like pros and settled down to bed.

Both Del and Bracks passed their trot up and I was looking forward to competing at this prestigious show. On the first day Del was very nervous so we had a couple of mistakes. This kept our score down at just under 68% and we just missed out on qualifying for the Grand Prix special, which was a shame as that was Del’s favourite test. We did have another chance to ride the Grand Prix later on in the week so I was hoping that he would be more settled for that test.

The following day it was Bracks turn in her Grand Prix. I was a bit worried that I may have thrown her in at the deep end for her first ever international Grand Prix to be in Hagen, but I needn’t have worried. She took everything in her stride and produced the best test I could have hoped from her at the moment. She is still very new to the level and quite wobbly, but she certainly didn’t disdisgraced self scoring 65.5% in Hagen in her first ever international Grand Prix. As she did her absolute best and gave me her all I decided not to run her in her second class.

As I decided not to run Bracks in the consolation class it was just up to Del. I was just hoping for a more confident ride than on the first day and, as happened in Doha, he was much more confident and produced a personal best for us at international Grand Prix of 71.04%. It was a long wait until the end of the class but it was enough for us to win! I can’t quite believe that Del and I have won in Doha and Hagen, two incredible shows, this year! I now just need to work out how to get him confident for his first test so we can consistently produce the +70% scores, but I was very proud of both horses!

It was then time for the journey home (which seemed a lot easier after Del’s win!) and a quick turnaround before Mum and I headed off to Vancouver to take part in the West Coast Dressage Convention with Adelinde Cornelissen, exciting times! 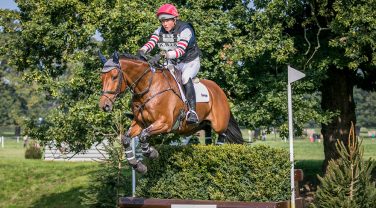 The Joys of Young Horses

So with regards to Osberton we had a fairly mixed week. I had merrily said to the owners of my 3 x 6yr olds and 3 x 7yr olds that I thought Osberton would be a great show as an end of term finale.