Posted on 29th March 2017 and written by Hannah Esberger

So proud of our Head Groom, Fern Carroll, who has completed her apprenticeship with us. In her first outing on her young horse, the 5-year-old Hamilton they won and came 3rd in both of their prelims. Both now need to get out and about a little more but it was great to see them between the white boards. We then took them home and went back with baby Larry. I can’t believe how much he has improved since his last outing, he looked and felt much more grown up and went on to win both his Novices with 71.7% and 70.8% qualifying for the summer championships in just two outings! 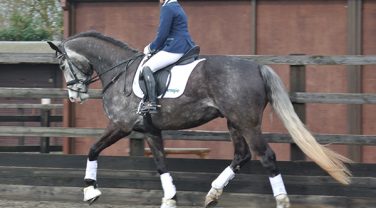 Yesterday was Larry's first show! I must say it is so easy to forget 'young horses' first outings but he made us all very proud!