Posted on 6th November 2015 and written by Brook Howells

Well, there it is, the end of my 2015 season. I’m sat supervising Florence as she explores every nook and cranny of the living room (discovering that ‘at a crawl’ might be slow in a car but it’s pretty fast for a 7 month old!), musing on how far we’ve come. We’ve proven that eventing with a baby is just about possible and definitely still something we want to do, just about got ourselves back up to novice level, figured out the show jumping, and completed our first medium dressage test. Although I’ve not managed to get many runs in, as I look back I am really pleased with what we’ve achieved this summer. The last few weekends have been really busy in particular, so apologies for the long blog!

Firstly, Corey and I went to Weston Park for the BE100, knowing it would be a tough track as the under 18 championship was on the same weekend. He got a bit excited before the dressage as he heard the loudspeakers, so we had a ‘keeping the lid on it’ job for a respectable score that put us in the top 10. We show jumped quite well, more fluent than usual and I felt unlucky to have two down. I was at least not at all nervous beforehand and not thinking the fences looked too big, which boded well for my novice run the following week. The lorry park had been full of chatter about why the cross country was causing so many problems and how you needed to ride fence three a certain way to give them confidence for the rest of the course. I felt confident setting off because Corey should really be able to storm round any 100 track you like now, but then I nearly came unstuck at the third – so nearly in fact that one witness expected Corey to be continuing on his own. We got through the first water fine but then the ditch combination was messy and awkward. We’d schooled over the novice track at Kelsall Hill just a few days before and he’d been jumping big tables like they were nothing, yet here we were messing up over small and straightforward fences. I was very conscious that I didn’t want him to lose his confidence so questioned whether I should pull up, but then we took a stride out at the steeplechase (weeee!!) and were off again. Only to come to a sudden stop at the first of Janet Plant’s infamous single barrels. I’d set Corey up well for the question but not quite ridden the last stride right and he couldn’t get his legs sorted to take off. We jumped it the second time, got over the second of the skinnies and that seemed to be the turning point; my decision to keep going was rewarded with a strong finish and Corey eyeing up the CCI* fences keenly (honestly, if they weren’t flagged off I’d have been tempted…).

Up next was Broadway novice. On the Thursday I very nearly rang up to withdraw. I was tired, feeling slightly overwhelmed with everything, struggling to get Florence to eat anything other than cucumber sticks (the joy of weaning) and lacking confidence as a parent, which was filtering down into my confidence to go eventing. We’d arranged to stay the night down near Broadway to make it easier but that was just adding to my stress as I had to think about all the stuff I needed for Floss and how we could feed her etc etc. Amazing husband Al stepped in, helped me plan ahead and yet another decision was vindicated because in the end, we had a fantastically fun weekend. Corey was stabled at a bed and breakfast and due to there being no room for us, we were a mile down the road – which was just as well since several of the event officials were staying in the former and having delayed their visit to the pub by parking my trailer in their way, I didn’t really want to further ingratiate myself with them by keeping them up all night with a crying baby….!!

The dressage went well, despite our arena being right next to the cross country finish. I just enjoyed it because I was there to tackle the jumping and I know the dressage will be there on other days. The show jumping track walked up to height but nothing too scary or tricky – and it rode beautifully. I was thrilled with Corey, who although still slightly hurried at times and motorbiking odd corners, jumped a nearly foot-perfect round. It felt great to be back jumping a novice track so confidently, as I’ve been working towards that all summer. Our whole aim for Broadway had been to start the cross country; with everything that has happened this year, we felt that managing to get through the start flags of a novice track would be a great achievement, and what happened on the course was less important for now because we can work on that. And so it was that I set off – with some of the least nerves I’ve ever had! – absolutely loving being out over the bigger course. I did however feel that Corey was noticing the fences were bigger and, although still jumping boldly, he was not having the most fluent of rounds so I think his confidence was starting to dip. When I then rode to the first of a double of skinnies like I was on a much more experienced horse and, on realising we were all wrong, rather threw the reins at him, he showed his inexperience and ran out. (Repeating mistakes from Weston anybody? So frustrating!) I know that I as a rider have an issue with riding forward to skinnies and I think on this occasion I overcompensated. We were only a third of the way round and with his confidence already knocked I decided to call it a day; it was disappointing to end the season that way, but I know I have all winter to work on it so next year we can have a much better crack at novice. I achieved my aim, learnt a lot more about Corey in the process, and now have a better understanding of how best to keep furthering his education now the questions are getting harder.

After all that excitement, we had one big competition left before the winter training kicked off in earnest – the annual Wendy Ashton Combined Training at our riding club. I have wanted to win the top class (an elementary dressage test with 1.10m show jumping) for many years and am often just pipped at the post. This year, the club created a new top level – medium level dressage and 1.20m show jumping. There went my dreams of winning; I have been working on doing medium dressage for the last year and whilst I wouldn’t say I was very good yet, I was ready to tackle that (even though it meant throwing myself in at the deep end with one of the hardest tests!), but I was not going to be jumping 1.20m!!! Corey excelled himself in the dressage – a third placing in the elementary and a medium that surpassed my expectations simply because he didn’t have any tantrums and tried hard throughout to lie 2nd (of 3). He jumped pretty well in the 1.10m but the dressage leader stayed ahead to take the title. But, hold your horses! I was the only person who had done the medium dressage and was having a jump… so if I got round the 1.20m course and wasn’t eliminated, I’d have won that class… Now, call me a pothunter but that is worth a go, right? My friend also wanted to jump the 1.20m and Corey had jumped the 1.10m so fluently I figured, what the heck?! Needless to say it wasn’t the best of rounds, but we finished with ‘only’ 20 penalties and that was enough for us to win! [Almost] more importantly, it was fantastic fun, it showed me how brave I can be riding to a coloured fence when I need to be, and it proved that a winter jumping 1.15/1.20 to prepare for novices next year is not such a crazy idea after all! 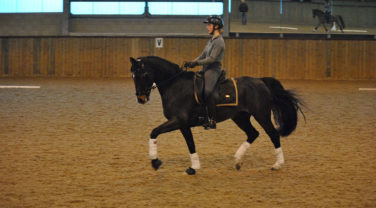 Sometimes all is not quite as it seems

Sometimes all is not quite as it seems...So Leo has been training hard all winter, but Jan 1st has come along which can only mean one thing ... our new PFEI season has started.