The Ups and Downs of Eventing!

Posted on 26th May 2015 and written by Tanya Buckingham

A couple of weeks ago we went to Richmond Horse Trials where Sparkle was in the Intermediate. He did an ok dressage test, he was a little abrupt in downwards transitions but I didn’t really think much of it at the time. We then went on to show jumping where he warmed up ok, not pinging but clearing the jumps and I put his lack of spring down to the new arena surface being a little deep. However, we then went into the jumping and he kept going disunited and had two down and a stop!  Again I thought it was strange and that he must have just been having a bad day and got ready for the XC. Off we set and he was jumping ok, but kept hanging to the right. We got to the new fence on the course a serpentine sequence mid-way round the course and on the 3rd turn he came to a grinding halt at the corner which he never does – at this point I really should have retired but didn’t want to finish on that note so went steady and finished the course. There was no obvious sign that there was much wrong with him but he wasn’t himself so I rang my physio and she met us back at the yard to have a look at him! He was out in his poll and pelvis which explained why he found the jumping off a bend so hard – poor pony!  After the physio he had two days off and had a few exercises to do, on Monday he just had a light session and then went jumping with Susie Gibson on Tuesday where he jumped fabulously – he was back on form!

We set off to Floors Castle for the 2 star on Thursday morning as I had my dressage test in the afternoon. Sparkle was very relaxed in his test – almost a little too relaxed! He did a nice test, nothing flash but felt the most rideable he’s been in the dressage arena. We walked the XC after the dressage and it was a good, bold, up to height track (typical Scottish event), they had built a fab new water complex and changed the way the course ran for the first time. I thought it was great! We stabled at the racecourse overnight (Floors had very kindly provided free stabling for the international classes). The show jumping was first on Friday morning and he warmed up brilliantly, then went into the ring and we both just backed off a little – probably thinking about the jumping the week before at Richmond, so unfortunately had a couple down. The XC was next and he was fab – apart from a near miss into the water where he slipped after losing a shoe at the previous jump! Luckily he got his landing gear down in time and we didn’t get wet!  See the below photo for how lucky we both were!  We had a steady clear as after losing the shoe, I backed off the time but it was another 2 star completion and a good test before his next few events! 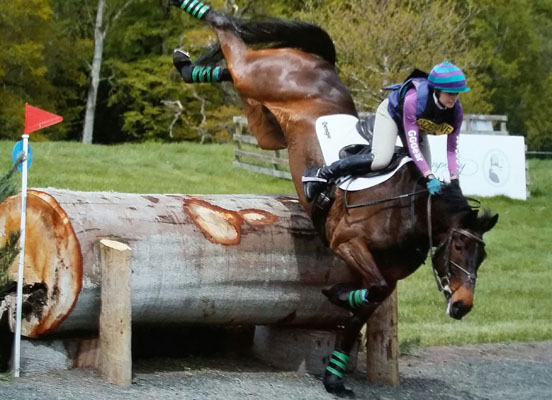 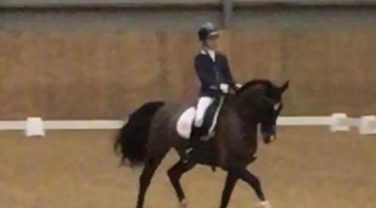 A Great Start to the New Year

Leo and I have enjoyed a lovely Christmas, but we had only a limited break as we have been busy throughout December preparing for the FEI test review weekend for the GB Pony Squad riders.