Time Flies By When You’re Having Fun

Posted on 7th September 2015 and written by Alice Oppenheimer

Well, we’ve certainly been busy…so busy that I could have sworn I’d done my July update, until I had a look and couldn’t find it, so I apologise for that!

Therefore we’d best start with July! It began with the Hartpury festival of dressage. We left on the Wednesday with Bracks (Headmore Boadicia) for the Inter II. We thought we had allowed plenty of time to travel as we knew there were roadworks, but we still got so held up that we arrived with only ten minutes until I had to get on. Luckily Bracks doesn’t get flustered about things like that and she produced her best Inter II test to date to score over 68% to finish 3rd, only 0.2% behind the winner! The following day started with Socs (Tantoni Sir Soccrates) in the semi final of the young horse PSG. He was a star producing his best PSG test to date finishing 2nd with over 75%, only 2% behind the almighty, all conquering Farouche. It certainly got everyone talking. Bracks then contested the Grand Prix. As ever she tried her heart out, almost too much at times, so we had a few green mistakes. Nevertheless she still scored her best score at that level to date to finish 8th, so far we were having a fantastic show!

We returned for the final of the young horse PSG at the weekend. It was a real test as it was held during the gala evening performance so there was quite a buzz. Socs was an absolute star and tried his heart out, finishing 2nd with another +74% score! We finished off the weekend with a final Inter II test on Bracks. She was a bit tired which led to uncharacteristic mistakes in the canter work which brought our score down. Overall, however, it had been a fantastic week!

There wasn’t much chance for a rest though, as the following week we headed off to Hickstead for the CDIO. Del (Headmore Delegate) and I had been selected to be a member of the nations cup team so I was really excited to ride on the team in our home leg! Socs was first to compete in a very strong PSG class. Once again he was an absolute superstar and gave me everything, winning the class with nearly 74%, beating some outstanding combinations in the process, a fantastic start!

The following day it was Del’s turn in the Grand Prix. After our ‘dodgy’ ride at Hickstead premier league I was just hoping for a relaxed ride. He felt really good but there were a couple of serious ‘pat the horse and slap the rider’ moments in the canter work. Despite my mistakes, we still finished on nearly 69% to finish 4th and best of the British team riders!

The next day started off with Socs in the Inter I freestyle. We were drawn second to go and overall I was very pleased with the test, we just had annoying mistakes in both canter pirouettes as we were a bit ahead of our music, but we still finished with over 74%. It was a long wait to find out where we finished and we were just pipped into 2nd by the last rider to go, but it was a still another outstanding week for Socs! That afternoon I had to ride my second test for the team in the Grand Prix special. There was quite a lot of pressure as my score really needed to count, but Del answered every question to score +70% in that test for the first time, finishing a very close 2nd! It was a wait to find out where the team finished as we had to wait for the riders who were competing in the freestyle. It was a nail biting finish and we were just pipped into second by Denmark, but it was the most amazing experience and I can’t wait to compete in more Nations Cups!

Once again there was no rest for the wicked as it was Tank’s (Headmore Wimoweh) turn to compete in the regionals. He produced two fairly solid tests in the medium open and advanced medium open to score +70% to finish 5th in both classes. This meant we had a rather agonising wait to see if he would be awarded a wildcard!

On to August and we started with competition of a different kind! We took Barney (Headmore Bugatti), our Belissimo M x Damon Hill foal, to the BEF futurity at Catherston. He was awarded a perfect condition score courtesy of his Dengie diet by the vet, before going on to be awarded an Elite premium with a score of 9.10. We were thrilled to say the least!

We finished off our manic couple of months with a trip to Addington with Wilbur (Headmore Wrubinstar) for his regionals. He hadn’t had the best preparation as he had pulled a shoe off a couple of weeks beforehand. Despite this he still scored over 69% in both the medium open and advanced medium open to finish 4th in both classes of over 40 and qualify directly for the Championships!

We then had to wait for the announcement of the wild cards to find out how many would be going to Stoneleigh. Tank, Bracks and Del all got their wild cards at their respective levels so we have all five horses going and I will be competing in every class from medium up to Grand Prix, I think we are going to be busy and will need to pack plenty of Dengie Alfa-A Original! 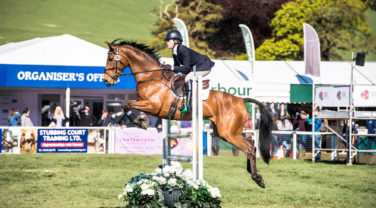 A game of snakes and ladders!

Eventing is like a game of snakes and ladders...one minute your on the ladder up and everything is going well and the next minute it all goes wrong and your back on the bottom trying to work out what happened.