Training the Youngsters with Carl Hester

Posted on 9th November 2017 and written by Hannah Esberger

I took the youngsters Iggy and Isa, it was pretty cold down there, probably the first really cold day we’ve had this winter. Isa easily relaxed into her surroundings, but Iggy was a little jolly and full of himself!

Now that Iggy understands ‘forward’ we worked on slowing him within the pace, then worked a little forward trying to get more swing within the pace and also working on straightness. Isa was so good too and is perhaps a little more established and grown up about her training than Iggy. Again we worked on slowing within the pace, encouraging swing in the back and straightness on straight lines and circles, watching the shoulders and quarters aren’t swinging in or out. Isa has part qualified for the Novice Music regionals and I’m aiming to get to Manor Grange on the 14th November to complete that qualification. Iggy has only been out competing once and was great gaining half of the qualifying marks so I need to go out again and repeat his early success, but have been a little reluctant as he’s just grown so much and has only just become strong enough. Then the focus will be on training for the regionals and aiming for the 5 year old classes next season. 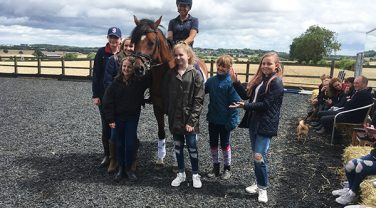 I had a fantastic day with Grove Hunt Pony Club introducing the young riders to the British Young Riders Dressage Scheme.