Posted on 27th July 2016 and written by Hannah Esberger

The lead up to the regionals at Port Royal had been good until Lenny threw an abscess. He was very brave with it, never the less he was just under par. Lenny’s PSG was good and I was pleased with his effort, as he is still green at this level. We gained 10th place. The Advanced Medium was going well until he objected to my over asking for a change and we scored 1, 2 and 4…if only the judges had all given me one more point each we would have won – instead we came 4th and unfortunately only 3 qualify to the Nationals!

Potter was just not happy there…he does not like small busy working in and went in tense. He scored 66% in the elementary and then went on to the medium, which I thought was a much better test but still not good enough and scored 64% On reflection, we had good weather, good stables and a good times. We tried to cover all aspects, but sometimes it is just not your turn – next time we will do better!!

P.s…I hope you all like my new tail coat, all in readiness for the higher levels 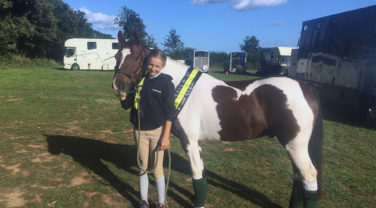