Winding Down to Year End

Posted on 17th October 2014 and written by Brook Howells

We’ve had a quiet few weeks now that Lincoln has been and gone and our eventing season is over, but Corey hasn’t quite finished for the year yet. We’re going to take advantage of his fitness to work on his flatwork a bit more; aiming to set us up for a great spring in 2015, without the pressure of imminent important competitions.

We took the opportunity of the season ending to have a family holiday indulging in some sailing round the Greek islands. It only occurred to us afterwards that there may not be many families prepared to spend a whole week together once the children are grown up, but for the most part our motley crew of my older brother (Skipper), Mum (First Mate), Dad (Chef), husband (Ship’s Apprentice) and I (Stowaway) had a great time. One stormy night and a near miss with seasickness has left me convinced that I prefer eventing in mud and rain to days afloat, though I was persuaded just once or twice to take the helm. I’m told my attentiveness to ensuring all the “sink-me hatches” were securely closed before we set sail each morning was exemplary too!!

Returning from this jaunt, I was greeted by a dark hairy mass, under which, I believe, was a Corey. They say Connemara crosses revert to their native type when in ‘poor keep’ and Corey, despite being very well looked after whilst we were away, had spent two weeks in the field perfecting this art. Thankfully it only took a short(ish) session with some clippers to reveal the Supercobs within.

And so we are back into the schooling routine, at least while there is light to ride after work. We’re focusing even more strongly on him having a long, relaxed neck, to try and overcome his tendency to overbend; this is a great time of year to test out new techniques. It feels a little strange and half the time I’m reminded of my days at riding school when the ponies resolutely ‘assumed the position’ and all you could do was sit atop with your hands forward as if they were taking the contact… Progress is being made though, I am sure!

There have been a couple of jumping sessions recently too. Fantastic fun (especially in Corey’s world) but with an obvious lack of the refinement we’d achieved at Cumwhinton. Any memory of how to complete a round with balance and control seems dim and distant, replaced by excitement and speed. He’s jumping absolutely brilliantly, it’s just the approach and get away that need work… The videos of him at the latest riding club competition (where I had to make the second round a schooling rather than competitive effort) look far better than he felt. However, as I have just one jump left – at the riding club’s annual combined training in two weeks – I think I might just dig out my flash noseband. As Mum told a friend in the club who asked if Corey was now winding down for winter; “Yes he is, he just doesn’t realise it himself!” 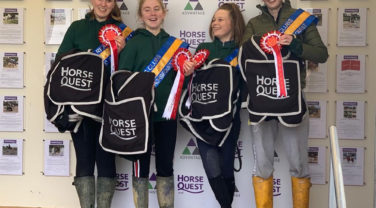 March was both quite a fun and successful month. CiCi is feeling better than ever and everything felt like it finally was coming together.