Posted on 31st May 2017 and written by Hannah Esberger

We had a great show at Addington!

Isa was fabulous and so brave, she came 4th out 28 in the top young horses class! We are so proud of her!

Lenny had a bit of bad luck on the first day as just as I was going in the horse in front threw a complete wobbly and he just got so worried and tense inside…which showed in his canter movements. The next day he was lovely albeit he threw in a bit of freestyle i.e one time changes not needed down the final centre line and two times in the three times, but with all the canter mistakes he was awarded really good marks in his trot which just flowed lovely. We achieved 65.2 % so we gained qualifying points towards a regional Prix St George.

Jagger (Wild Thing) had his first outing. We used a test training class so his first experience would be good. The venue is so close to us, so he did not have to travel far and the venue was not busy. He was watchful for all the bogey men but settled and tried hard.

Our next outing with the young horses is at Manor Grange, I’m so hoping my babies just keep improving! 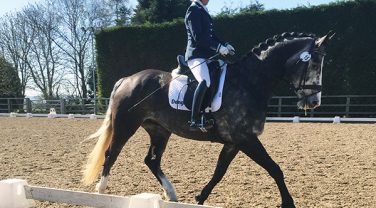 So proud of our Head Groom, Fern Carroll, who has completed her apprenticeship with us. In her first outing on her young horse, the 5-year-old Hamilton they won and came 3rd in both of their prelims.