Posted on 12th July 2010 and written by Dengie Feeds

Antioxidants is one of those topics that we’ve probably all heard of but don’t know much about. This is not such a great surprise, though, because there are many antioxidants with a wide range of functions and benefits attributed to them. It isn’t necessary, however, to know each and every one to appreciate why they can be beneficial.

The first thing to clarify about antioxidants is that some are added to feed to protect the product itself, whereas others are included for the horse’s benefit. Antioxidants in feed help to increase shelf life and maintain quality. This can be particularly important in hot climates, where feed will go off much more quickly. Those added for the benefit of the horse can sometimes help to protect the feed, too, and will either be nutrients such as vitamins or minerals, or phytochemicals (chemicals from plants).

So why does horse feed need antioxidants?

Oxygen is essential for life, but oxidation can produce harmful free radicals. In fact, it is suggested that 3-5% of oxygen taken up by a cell results in free radical production. Free radicals can cause damage to cell membranes and even DNA, and it is this damage that contributes to the ageing of tissues, which can ultimately cause serious diseases, including cancer, inflammatory diseases such as arthritis and degenerative neurological diseases such as Alzheimer’s and Parkinson’s.

Free radicals are also produced by pollution, radiation, UV light and cigarette smoke. The more tissues are exposed to these sources, the greater the potential for damage to be done.

There are several groups of horses that are likely to benefit from increased antioxidant intake:

Where do antioxidants come from?

One of the reasons we’re encouraged to eat a “rainbow” of fruit and vegetables is that different antioxidants are abundant in the different-coloured fruit and veg. For example, lycopene is found in tomatoes (including ketchup), whereas proanthocyanidins are found in berries, currants and grapes.

Surely the horse just eats grass, which is green?

It is fair to say that we don’t know the full extent of the antioxidant profile that a horse or pony would consume in its natural diet. By natural, we don’t mean the improved pastures that the domesticated horse is kept on, but the forests and moors that are home to native breeds. As the horse would naturally have eaten a much wider range of plant material – including herbs – in these environments, it is likely they would have consumed a more diverse range of antioxidants than grass alone contains.

How do I feed my horse more antioxidants?

The first step is to ensure that the diet is balanced with vitamins and minerals because these are essential nutrients and vital to health and performance. Increasing the diversity of plant species in your horse or pony’s grazing isn’t always practical, so including different types of plant material in the bucket feed might offer a more feasible alternative. Alfalfa, for example, is a rich source of beta carotene and flavones, as well as vitamins and minerals. Adding apples and carrots to the feed is not just a nice treat, but would also supply additional antioxidants such as quercetin, which is found in apple skins. 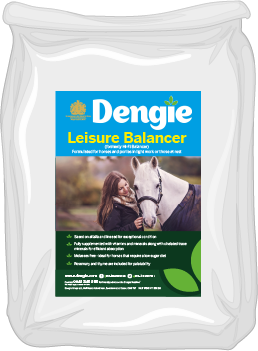 Formulated for horses and ponies in light work to be fed alongside any Dengie fibre feed. 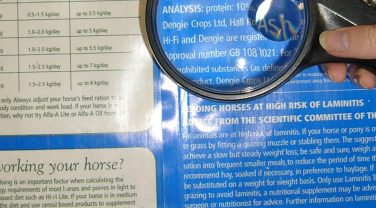 Reading the label on horse feed

We explain how to read the label on your horse feed to understand more about what you are feeding your horse or pony.