Buffering Properties of Alfalfa – the Proof

Posted on 22nd April 2014 and written by Dengie Feeds

An independent study has backed up Dengie’s own research into the buffering capacity of alfalfa and its positive effect on the horse’s digestive system, particularly with regard to stomach ulcers.

The study undertaken by Texas A&M University took 24 Quarter Horse yearlings and fed one group grass hay and the other alfalfa. Both groups were exercised during the trial. The study showed that horses fed alfalfa rather than grass hay had fewer ulcers even when the horses were turned out to grass.

The most surprising finding of this study – one that could change the way horses with ulcers are managed in the future – was that horses turned out to grass and not exercised had higher levels of ulcers when alfalfa was removed from the ration. These results suggest that simply turning horses with ulcers out to grass to recover, as is commonly done, is not as effective as including alfalfa in the ration.

If you would like more information on the benefits of alfalfa or specific advice on how to feed your horse or pony, please telephone the Dengie Feedline on 01621 841188. 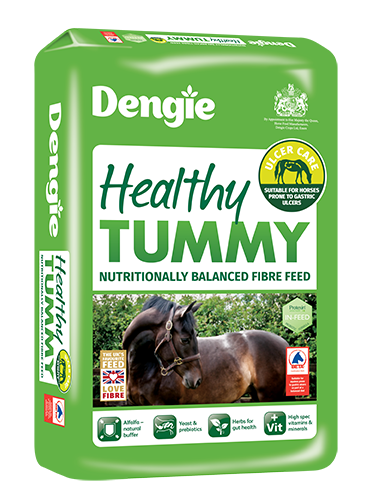 Feeding alfalfa alongside cereals and grass has the potential to counteract the negative effect of increased acidity in the hind gut as well as the stomach.