Can fibre really fuel a horse in hard work?

Posted on 17th January 2011 and written by Dengie Feeds

If you’re taking the time to read this article, it’s highly likely that you already appreciate the importance of fibre for your horse’s health and wellbeing. What you might be less certain about is how great a contribution fibre can make to a horse’s energy requirements, particularly those working at harder levels. But, before we get to that, let’s start by clarifying a few terms that can cause confusion.

It’s important to distinguish between forage and fibre. Forages are a source of fibre but they also contain other nutrients that might supply energy such as sugar – grass, for example, is often the greatest source of sugar in many horses’ diets. Fibre is a nutrient that can be found in lots of feed materials in varying levels and, although in humans its main benefit is to promote regular bowel movements and therefore good gut health, the horse can actually extract energy from fibre.

There are different types of fibre – from the very digestible pectin to the less digestible cellulose. Lignin is often referred to as fibre but, although it has a structural function, it is indigestible and not technically fibre. High levels of lignin significantly reduce the digestibility of a forage. The types of fibre in feed materials vary, thereby determining how useful they are as an energy source to the horse.

Fibre is often referred to as structural carbohydrate. Although it is made up of glucose, as other carbohydrates like starch are, the way in which the glucose units are linked together is different. This means that the digestive enzymes produced by the horse cannot break the links, so the horse relies on bacteria and other micro-organisms to break down fibre. This releases energy that the horse can then utilise. It vital, therefore, that the microbial population in the gut is healthy because, without the right bugs, the horse is unlikely to look or perform well.

The volatile fatty acids produced as a result of fibre fermentation can be used straight away as an energy source in the presence of oxygen or stored for later use. A particular type of fatty acid called propionate has been shown to be converted to glucose in the liver. This is a term known as gluconeogenesis – where glucose is produced from sources other than carbohydrates. It is a less efficient process than glucose generated from glycogen because more energy is required to generate the glucose, but it is a normal metabolic process and helps to maintain glucose levels in the body for forage-fed horses.

The digestibility of a forage affects how much energy the horse can extract from it. Sugar beet that we commonly feed to horses has had most of the sugar removed, leaving a fibrous residue, which is very digestible. It has an energy value of between 11MJ and 12MJ DE/kg, which is comparable to a medium- to high-energy mix.

In trials carried out at the Institute of Grassland & Environmental Research, sugar beet was found to increase the digestibility of other forages fed alongside, making it a useful addition to fibre-based diets for working horses. Alfalfa is another high-fibre feed that can make a significant contribution to a horse’s energy requirements. At 10MJ DE/kg, it is comparable to a low-energy mix and, if oil is added, the energy value increases to 12.5MJ, which is equivalent to a competition or conditioning mix.

There is no question that endurance work can be fuelled from fibre and oil, but what about high-intensity work where speed and/or power are required? Although we know fibre can be converted to glucose, it is relatively inefficient, so, theoretically, quick-release energy sources might be required for the very highest levels of work intensity.

However, it is important to consider the natural athleticism of the individual horse and its temperament because these factors can also influence the type and amount of dietary energy required. For example, many event horses can make the time cross-country, even at four-star level, with no problem at all and the biggest challenge is keeping them calm enough to perform a good dressage test.

Fibre is recognised as a slow-release energy source, so, for over-excitable individuals, a high-fibre diet is recommended. Avoiding wasting energy on silly behaviour can help to improve performance because the horse isn’t depleting energy stores before it starts or losing electrolytes through sweat, which can result in the early onset of fatigue, particularly in hot conditions.

If a high-fibre diet is used for a performance horse, it is important to ensure the diet is balanced, which can easily be achieved by using a good-quality supplement or balancer formulated to meet the needs of the performance horse. A suitable diet for a 500kg Advanced event horse would be:

One of the common mistakes with fibre feeds is that they tend to be under-fed because they are so light and fluffy. Relative to cereals, a larger volume needs to be fed. Think a ton of feathers versus a ton of coal – they are the same weight, but the feathers take up a lot more space. This leads people to think that they are over-feeding, but it is not the case with fibre feeds because they don’t overload the digestive system in the same way that cereal-based feeds do. In fact, more chew time is really beneficial because it helps to keep the gut functioning normally – a definite recipe for competitive success!

For further nutritional advice, telephone the Dengie feedline on 01621 841188. 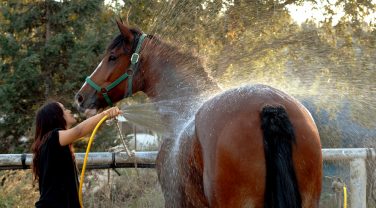 Hot weather, increased workload and more time on the road travelling to competitions can all increase the risk of dehydration. Dengie Senior Nutritionist Katie Williams, MSc (Dist), provides some top tips for preventing this. . .