Posted on 7th July 2009 and written by Dengie Feeds

The problem of obesity has received increased attention recently and, with the latest predictions from the World Health Organisation suggesting that 700 million adults will be obese by 2015, the subject looks set to remain in the spotlight for some time. In the UK, it seems that we’re just as bad at regulating our pets’ diets as we are our own.

A study in 2009 showed that a third of household pets were overweight and the indications are that this is an increasing trend. While there is limited population data for horses, the information we have gathered with our portable weighbridges suggests that up to 60% of horses are overweight.

How do we measure obesity in horses?

In humans, obesity is measured using the body mass index measurement, which uses an individual’s height and weight to create a score that is directly correlated with body fat. This system cannot be applied to horses because we know that certain breeds and types could be the same height but have very different “ideal” weights.

The body weight of a 14.2hh Arab and a Highland, for example, could each vary by 100kg. Instead, condition scoring systems have been developed that should be used in conjunction with weigh taping to determine a horse’s ideal weight and condition.

Condition scoring uses the fat that can be seen to indicate total body fat. The key sites of fat stores are the crest of the neck, over the ribcage and the quarters, as well as the shoulders and the tail head. Not all horses and ponies store fat in the same places, so it is important to assess all areas to determine whether a horse is overweight. What you can be sure of is that visible fat reflects the fact that fat is being stored around internal organs, too.

Why are horses getting fatter?

There are a multitude of contributory factors, including:

What are the effects of obesity in horses?

Being overweight places additional strain on joints and organs such as the heart and lungs, and increases the risk of diseases such as laminitis. Metabolic syndrome is a term being used to describe horses that are overweight and have insulin resistance. Insulin is responsible for regulating blood glucose and, if resistance develops, blood glucose and insulin levels will increase as more and more insulin is produced, but has no effect. Whereas fat stores were once thought to be benign, it is now known that they can develop the ability to produce hormones called adipokines, which can also compromise the action of insulin.

Another effect that has received limited attention but is certainly on the increase in humans and possibly equines is non-alcoholic fatty liver disease (NAFLD). Obesity increases the storage of fat in the liver in the form of triglycerides. Initially, this doesn’t cause any significant damage but, over time, it can result in inflammation and, eventually, cirrhosis or permanent liver damage.

In human studies, a 5% reduction in weight was enough to improve health significantly. Although, in a horse, 5% equates to 25kg rather than 5kg in a human, it is achievable. The first step is to know how much energy your horse is consuming and how much it is burning. Energy can be measured in either calories or joules – tthey’re just different measures for the same thing, just as Celsius and Fahrenheit both measure temperature. For horses, we tend to use Mega Joules (a million joules) and, in humans, Kilo Joules (one thousand joules).

Calorie counting for your horse

It can be difficult to count all the calories that a horse consumes because the staple components of its diet, such as grass and hay, vary in energy content. Although we all want our horses to be out as much as possible, it is important to consider that grass will be contributing lots of energy, so might have to be limited or even removed from the ration altogether to give you control over your horse’s intake. Even a short time at grass can contribute a lot of energy. For example, 1.5kg of grass will supply your horse with about 3MJ, which is just under 5% of a 500kg resting horse’s total energy requirement.

The National Research Council’s Nutrient Requirements of Horses states that 45 minutes of schooling utilises about 12.5MJ of digestible energy. To put this into context, one scoop of a cool or pasture mix, which weighs about 1.25kg and contains 10MJ/kg of DE, will supply 12.5MJ. So, if you feed your horse just HALF a scoop of mix a day as a “treat”, you would need to give him at least 20 minutes of schooling exercise to utilise the energy it supplies. Because cubes weigh more than a mix, a scoop would provide about 16MJ, so would require at least 55 minutes of schooling to use up the calories.

If you have any comments on the issue of obesity or are struggling with your horse’s weight, please let us know by emailing feeds@dengie.com. 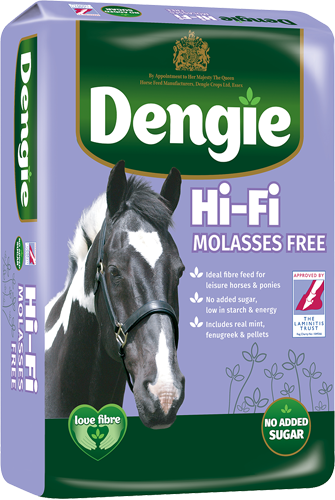 The ideal fibre feed for leisure horses and ponies requiring a low sugar and starch diet. 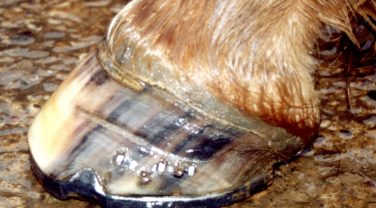 Laminitis is most commonly linked with poor nutrition, we explain how dietary management is key to reducing the risk of a horse or pony getting laminitis.