Posted on 12th March 2015 and written by Dengie Feeds

Dengie will be celebrating the 20th anniversary of its sponsorship of the Pony Club Winter League Championships when this year’s event takes place at Moreton Morrell College, Warwickshire, on 3 and 4 April. Young riders in the Show Jumping and Dressage Championships will be battling it out for a place in the ribbons. Special Dengie prizes will include Championship rugs, Dengie-branded jackets, saddle cloths, Dengie feed vouchers and 20th-anniversary commemorative rosettes.

Members of the Dengie nutrition team will be on hand throughout the event with their portable weighbridge and providing healthy feeding advice.

To mark the 20th anniversary of the Dengie Winter League Championships, the event’s very first winner, Laura Hedley Gray, will make a trip from her Gateshead home to join in the celebrations. The Pony Club has also launched a Great Dengie Cake Off online competition where entrants are invited to make a cake healthy Dengie feed based cake suitable for a horse or pony. The winner will receive £50 worth of Joules vouchers and their cake will take pride of place at the championships.

“It’s amazing that we have been sponsoring the Pony Club Winter League Championships for 20 years,” said Dengie marketing manager Lisa Wilson. “That’s two decades of supporting enthusiastic and talented young riders from around the UK and having the prime opportunity to promote the benefits of feeding a healthy fibre diet to this switched-on audience. “We wish every rider the very best of luck as they compete for a place in this extra-special, 20th-anniversary Dengie Winter League Championships.” 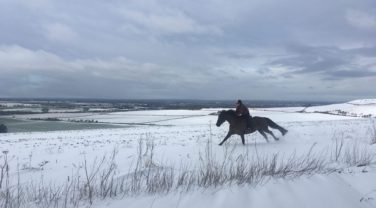 We catch up with one of the lucky winners, Natalie Muirhead on how her winter and competition preparation has gone with Charlie, her nine-year-old ISH gelding.