Behind the Scenes with Haydn Price – Part One

Posted on 7th July 2016 and written by Dengie Feeds

Haydn Price, Team GB Lead Farrier and Consultant Farrier to the British Equestrian Federation (BEF) and World Class Equestrian Programme (WCP) has been a practicing farrier for over 30 years and has a special interest in performance and lameness shoeing techniques. He has been instrumental in the practical application and understanding of farriery-specific biomechanics and the utilisation of equine gait analysis systems.

Married for 31 years, he and his wife have a daughter and small grandson. His main interest outside his work is flying helicopters and he has been known to drop into many of his clients in his helicopter – but his van and kit have to be driven there by one of his team!

As part of a series of exclusive interviews with equestrian professionals, Haydn Price gives Dengie an insight into his work and how he got started.

How did you get started as farrier?
I was transfixed by the process when having my pony shod for the first time at the tender age of 14. I went to the Hereford School of Farriery and we were lucky to have studied under the stewardship of some of the best lecturers of our time.

How would you describe what you do?
We are first and formost a service industry to the public sector and there are varying levels of business practice – some specialise in youngstock, some in racing and others like me have a particular interest in the performance horse.

What is your normal work day?
My alarm normally goes off at 6.00am, unless we are off early traveling and working away from home. At 6.20am, it’s freshly ground Columbian coffee to kick start the day – none of that instant stuff for me! We aim to have our first appointment in for 7.30am, then it’s a matter of keeping to timed appointments for the rest of the day. In the winter months we have normally finished the day’s routine work by 4.30pm. In the summer months that can extend to 6.30pm or even later. The day rounds off with sorting emails out and any telephone calls until around 8pm, when dinner is served by Mrs Price!

What do you like about what you do?
Apart from the obvious connection with horses, I also enjoy the interaction with other people. I particularly enjoy the problem solving aspect and working alongside other professional colleagues and riders. Competition horses are subjected to the repetative strain injuries similar to the human athlete, so it is important that we operate a pro-active approach to the prevention of injury equally as much as a reactive one when a problem occurs.

What is most challenging about what you do?
The intellectual challenge of trying to unravel the complications that are often involved with poor performance and/or longer term lameness issues. It’s all worth it though when you get a horse back on the road again, at any level, so that they can fulfil their owner’s expectations.

How much time off do you get/take?
Ummm very little, ask my wife! But I do get to travel and see some great places when I am part of Team GB, such as the Rio Olympics. I hope we will get to see a bit of the surrounding area but we are there primarily to support the riders and the horses.

What is a common misconception people have about what you do?
That I am semi-retired! I might be in the silver hair group but I am still working full time and seem to get busier rather than slowing down. It’s not just a question of shoeing what you get on the day – it’s about preventative measures and taking time to treat each individual horse.

What is the most valuable thing being a farrier has taught you?
That there is no excuse for not pushing the boundaries to achieve the best and you can only do so by giving 100% of yourself up to the challenge. 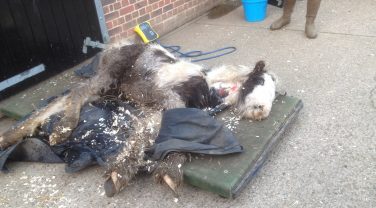 Gizmo is a nine-month-old foal. He was found in February 2015, abandoned without his mother and left to die on the side of the road. RSPCA inspectors rescued Gizmo and immediately took him to Catley Cross Veterinary Clinic. The Dengie nutrition team have been helping him on his road to recovery by providing dietary advice and regular weighing sessions.