Behind the Scenes with Sandy Phillips – Part One

Posted on 26th August 2016 and written by Dengie Feeds

As part of a series of exclusive interviews with equestrian professionals, Dengie catches up with Sandy Phillips International Dressage Judge and member of the Eventing Ground Jury for 2016 Olympic Games. In addition to judging, Sandy is a professional dressage trainer based in the Cotswolds teaching riders from Novice to Grand Prix.

In this first interview Sandy talks to Dengie about life growing up around horses in Hawaii and how she made the switch from top level eventing to dressage.

What kind of early experiences shaped your own riding and how did your career as a dressage judge begin.

I was born in Hawaii and although my parents weren’t in the least bit horsey my grandparents were. I grew up riding western and herding cattle with my grandmother who gave me my first horse – he was 16.3hh and 25 years old with only a few teeth!

Luckily they listened to my incessant pleas about wanting a pony of my own and bought me Keola Girl – my first pony – out of a riding school. This pony taught me quite a lot – especially how to stay on as she didn’t want to work without her friends and would nap back to the yard , whipping round, bucking me off daily! When I mastered the art of staying on with a western saddle we got on famously and she was an amazing pony. She was a talented jumper but had a thing about cross poles. Instead of jumping over the cross poles she would duck through the space between the wing and cross taking me under the high end of the cross pole. It certainly taught me to ride to the centre of the jumps.

In Hawaii, horse shows consisted of western competitions on Saturday and English classes on Sunday, all with the same pony, so I got great all round experience. In the summer we lived on the beach and my horses went swimming every day and got fit going up and down the huge sand dunes.

The Pony Club was big influence on me. Lio Lii Pony Club took me through my B Test and then I went back east to boarding school where I completed my A test. Having decided to take some time off from University, I went to England to do a season of eventing and ended up staying much longer! I had many top 5 placings at international events including Badminton, Bramham and Boekelo.

While the cross country was definitely my forte, dressage certainly wasn’t. I actually hated it as I didn’t understand it! So I decided I needed to do something about it. This was the start of my dressage career and many years of training with various mentors including David Hunt, George Theodorescu and Hubertus Schmidt.

My first team appearance as a dressage rider was in Lausanne in the 1982 World Games, where I rode a horse called Marco Polo and finished as the highest placed American. After this I represented the USA at the Toronto World Equestrian Games and the LA Olympics.

Having gained my British Citizenship, I represented Britain at the 1998 World Equestrian Games in Rome and the 1999 European Championships in Holland on a horse called Fun. He was an amazing horse but he had a wild streak and on those days he was called ‘No Fun’! In 2006 I was part of the World Equestrian Games team in Aachen with my mare Lara 106, who is now retired and one of the foundation mares for my breeding programme. Lara also won the BD National Championships in 2006 which was a very special competition to win for me!

What has been the most memorial or inspirational experience with your career?

My cross country round at Badminton in 1982 on Free Scot as we had a magical time. Free Scot I always considered to be the most difficult horse to ride. He was a pure thoroughbred and everyone I had ever trained with just told me to sit quietly and don’t put too much leg on him so I didn’t really understand about a horse being “in front of the leg”.

The following year I was training with George Theodorescu and he got on Free Scot to demonstrate what he was trying to teach me about getting the horse in balance. This was a truly inspirational moment. No-one including me had ever been able to ride this horse without him wanting to run off. George put him on his seat and in front of his leg so the horse was balanced from behind. He had Free Scot doing flying changes (they weren’t required in eventing at that time) and lateral work with such ease that I couldn’t believe my eyes. It was that moment that inspired me to learn how to achieve this balance.

Is there anything about dressage that frustrates you?

I feel that there is too much pressure in the dressage young horse classes. All horses develop at different rates and they should not be rushed before they are 6yo if they cannot cope physically or mentally and unfortunately there are too many riders who cannot tell the difference between a horse who can cope and one who can’t. There are very few top class GP horses that competed and won in young horse classes. Feeding huge amounts of conditioning feed to make a horse look developed is a disaster waiting to happen. Keeping it natural with plenty of fibre, turn out and relaxed work is the way to produce a future star.

Trainers and producers of horses for sale also need to work on their public image. They need to be honest about the horses they are selling, especially to the many amateurs who are in the market. Professional and amateur riders differ greatly and even though it’s great that the UK is now breeding and producing so many high powered, highly bred horses they are not all for the amateur rider. Over horsing someone is dangerous and gives the sport a bad image. Don’t put a learner driver into a Ferrari! 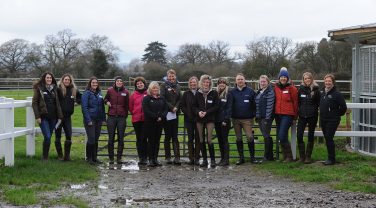 Your Horse magazine reveals its Win a Horse champion!

After a year of planning, searching and fierce deliberating the team at Your Horse magazine has finally revealed the winner of its exclusive Win a Horse competition.