Posted on 20th July 2016 and written by Dengie Feeds

We are delighted to announce that we are continuing our sponsorship of The Pony Club Winter Championships Show Jumping and Dressage into 2017.

All aspects of the competitions have gone on to become a rite of passage for talented grassroots riders, with many of the success stories going on to feature at The Pony Club Championships in the summer months.

James Loffet, Director of Disciplines at The Pony Club said: “We are thrilled to be continuing to work with Dengie on the development of The Pony Club Show Jumping and Dressage Winter Championship competitions. Our Members benefit enormously from the wide knowledge that Dengie bring; the partnership between The Pony Club and Dengie is well established, and works well as we share so many of the same values and ideals.”

There are also developments afoot for the competition, following on from the successful addition of an Intermediate level for the Dressage competition and the new venue of Addington Manor Equestrian Centre, Buckinghamshire; 2017 will see the introduction of a new show jumping class, Debut, that introduces an 80cm course to the competition, allowing riders to gain confidence in a championship environment.

Lisa Wilson, Marketing Manager commented “We are delighted to be continuing our support of the Pony Club. Having been the sponsor of the Winter Championships for over 20 years the “Dengies”, as they have now become known, are hugely important to us. Dengie is committed to educating young riders in healthy equine nutrition and the Pony Club is where it’s at!” 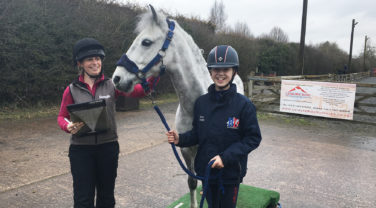 Dengie caught up with Olivia Langley as she finished her lesson with Dan Sheriff for an update on their progress.