Posted on 2nd February 2015 and written by Dengie Feeds

Dengie is lending its support to Ireland’s grassroots dressage with sponsorship of Wexford Equestrian Centre’s league for unaffiliated riders and horses.

The Dengie Dressage League takes place at the high-profile venue in Tomhaggard, Co Wexford, running throughout January and culminating in the final on 24 February, and will be judged by dressage trainer Ann Marie Dunphy. Prizes will be supplied by Dengie and presented by the company’s sales manager for Ireland, former National Hunt jockey Padge Whelan.

Six classes are featured in the league, ranging from the IPC Pony Club Under 12 test to Novice BE 112. “The sponsorship is a great way for Dengie to support riders competing at unaffiliated level,” said Dengie marketing manager Lisa Wilson. “It also allows us to promote the benefits of fibre feed and engage with some enthusiastic riders who are keen to find out more about Dengie and its great range of products.  Wexford Equestrian Centre is a first class venue and one that we’re proud to be associated with.” 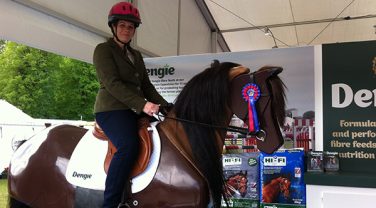 Team Dengie will be encouraging visitors to this year’s Royal Windsor Horse Show 11th-15 May, to Take up the Reins and #GetHorsey with the campaign’s mechanical horse RoboCob.