From Breeding Field to HOYS Ticket in 7 Months

Posted on 6th October 2015 and written by Dengie Feeds

Jodie Howie has been working with and competing New Forest ponies since she was 11-years-old. Growing up in Dorset, Jodie spent most of her childhood at her local riding school Green Cottage.

“Not having enough money for my own pony I worked for my rides and rode any naughty school ponies that needed a bit of extra work.” said Jodie “This progressed to learning how to break and bring on the Green Cottage New Forest Stud ponies. This is where my love affair with the New Forest ponies began, when I started grooming for the beautiful and talented Peveril Peterborough. I worked for 12 years with Fiona King  and some many amazing ponies, Sabinas Gold Sovereign and Green Cottage Ambassador. Until I fell in love and moved to Essex, taking three New Forest ponies with me. Ten years went by and many, many shows and a lot near tickets wins behind me, I found myself New Forest-less.”

Still in search of a Golden Ticket, Jodie started  her hunt for a pony with the potential to take her all the way.

“I called Fiona to see what she had.” recalls Jodie “She had Jupiter a 10 year old stallion, however he had only been lightly hacked and used for stud duties. Fiona was keen for him to do some more ridden work. I said what would you like him to do and the reply was ‘just something’.”

“On my way to Cornwall in October 2014 we went via Dorset and popped into see Fiona and Jupiter; well let’s just say it was a bit of love at first sight, he was a very handsome cheeky but charming fellow who rather took my fancy, the only problem was he was very much a diamond in the rough, unfit and no experience. He had done some in hand shows as a youngster winning supreme at the New Forest Breed Show in 2008 but had not been out yet under saddle. We felt he was a two year project in the making. After a very sleepless night and a call to Fiona we decided to give it a go and the day I got back from my holiday he arrived.

So the work began, he could not walk more than three straight strides and had the attention span of a goldfish I thought ‘oh boy I have set myself a challenge’, a winter program of getting him fit, schooled and educated to the big wide world commenced. I did lots of different activities to get him educated hacking, lessons, clinics, dressage, jumping. The key really was to make it fun and enjoyable. He was really trainable and learnt very quickly, so came along in leaps and bounds.”

Jodie got in touch with the Dengie Nutrition team and asked Performance Horse Nutritionitst, Claire Akers to come and assess Jupiter’s diet. As Jupiter’s work load had increased, Jodie was concerned about him maintaining condition over winter.

“Claire recommended Healthy Tummy, this feed is perfect for him and me!  His coat gleams, he eats up and has plenty of energy. I only have to worry about taking one product to shows as this feed contains all the vitamins and minerals he needs.”

“Then the winter shows commenced and boy did Jupiter  take it all in his stride.  First time out he went Ridden Champion. He then gained his Picton ticket, Open Ridden NPS Champs, came 4th at Suffolk Show in his first Olympia class, Qualified for the Olympia semi-finals at New Forest Enthusiasts.”

“Entries were closing thick and fast, so I decided to take the leap and enter some HOYS classes at the county shows to give him experience of the bigger atmospheres and to ready him for next season.  His first attempt was to be at Lincolnshire Show. So the day arrived and of we went. He went in the ring and it was like we had been doing it for five years, he just went like a pro and took it all in his stride.  We were second to last to do our show, so I felt a bit of pressure but we were only really here for the mileage, so of we went to give it our best shot. He aced the show, foot perfect and did our best gallop to date.

There were 11, of us in the class with nine placing’s up for grabs and they started to call the placings in reverse order, when it got to 4th place I thought ‘well brilliant anywhere now is a fab result’, my heart started to pound a little (as you always have a little bit of hope), but I kept thinking ‘there’s experienced HOYS ponies up there still to be placed don’t get your hopes up’, then one by one they got placed and my heart started beating faster.

Then there were two, by this point my heart was hammering in my chest and then boom it was us – we won wohoooooooooooooo! By the time I got to the top of the line-up, tears were streaming down my face with a bit of disbelief and a lot of joy.

My first ticket, his first season and our first attempt!

To me it feels like the best way to get my first ticket, with a pony that is of my own making and on our first attempt.

It feels extra special to accomplish this with one of Fiona Kings Green Cottage ponies that I grew up with and learnt so much from. So thank you Fiona for letting me have him and I think we definitely did you proud and surpassed the remit of ‘just something’.” 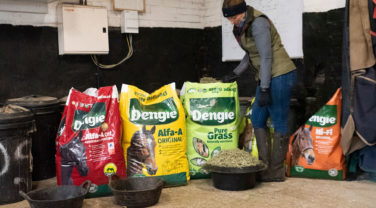 How to reduce your feed bill this winter: which is the best cost effective horse feed?

Removing any unnecessary extras in your horse's ration could help you save money, whilst still ensuring that they’re receiving everything they need. Speak to a qualified nutritionist for advice on the best horse feed for the money and for help in streamlining your horse or pony’s diet.