Gypsy Cobs Do It In Style

Posted on 18th November 2016 and written by Dengie Feeds

We were delighted to present the Championship awards at the inaugural British Dressage Natives Championship, held at Solihull Riding Club 28th-29th October 2016.

This hugely popular event saw entries from over 500 native horses and ponies.

As sponsors of the Traditional Gypsy Cob section, we were on hand to present the championship rosettes to the highest placed competitors in this championship.

Over 50 gypsy cobs took part in the weekend’s dressage championships; The Champions of the Dengie sponsored Intro section was Leanne Bailey, riding Moira Johnson’s eight-year-old Fairytale III with a score of 71.73%. Leanne from Stoke on Trent, Staffs, has only been riding Fairytale III, stable name Poppy, since the summer and decided to give affiliated British Dressage a try aiming for the Championships. They were also runners up in the Prelim championship too resulting in a very successful outing for this promising pair.

“Our preparation for the championships hadn’t gone well, in recent tests our percentages were way down on what they had been”, said Leanne.  “She was a bit spooky today with the arena banners and flowers but once she went down the centre line she knew she had a job to do and was brilliant.  I can’t believe we won!”

“Ted was Prelim champion here last year so the pressure was on” said Georgia after her winning test. “He’s only completed in three novice tests this year, so I wasn’t coming here thinking I was going to win but to do just that is amazing! He’ll now have a couple of weeks off and then during the winter we’ll focus on training and aiming for the elementary championships next year.” 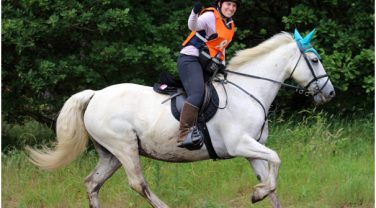 Going the Distance With Dengie

The Sport Endurance ride at Blidworth Forest took place on the 4th and 5th of July, with Dengie sponsoring a number of classes. Around 200 combinations, made up of both competitive and pleasure riders and their horses, took part in the ride, which was run over private farmland and forestry commission woodland.