Posted on 3rd April 2015 and written by Dengie Feeds

Research into the link between diet and horse behaviour commissioned by Dengie and conducted at Edinburgh University has been published by Applied Animal Behaviour Science – an international journal reporting on the scientific and objective study of the behaviour of animals managed by humans.

“This fantastic news and means that the study can now be referred to as independent peer-reviewed research, which gives it a much higher level of credibility,” said Dengie technical and product development manager Katie Williams. “It will also be used by other researchers carrying out further studies in this field.”

The study was conducted last year by project leader Dr Jo-Anne Murray, researcher Louise Bulmer, from Glasgow University (formerly Edinburgh University) and Sebastian McBride, from the University of Cambridge. Although the effect of diet on behaviour had been studied in many species – including humans and rats – very little had been done to explore the link between horses and diet.

Eight mature horses were used in the study, which ran from January to March, at a time when grazing was sparse. They were each kept in light work – taking part in jumping and flat work for five days a week – with daily turnout for between four and six hours at weekends.

The horses were divided into two groups and fed each of the diets for 28 days in a crossover-design study. Behaviour was measured throughout as the horses were introduced to new situations and equipment. Heart rate was also measured to monitor stress levels during the tests.

The study showed that, overall, the horses had higher heart rates (indicating higher stress levels) when exposed to new situations when fed a cereal-based concentrate mix compared to when they were given fibre-based feeds.

This suggests that, although high-starch diets are considered an effective energy source for humans undertaking increased exercise, they are not necessarily ideal for providing energy for working horses.

Instead, energy might be better provided by feeding good-quality fibre because the study concludes that this type of diet appears to reduce reactivity, making horses easier to handle from the ground.

Click here to view the full version of the study. 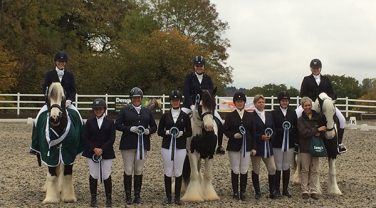 Gypsy Cobs Do It In Style